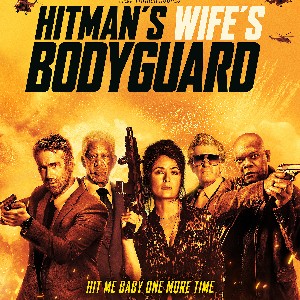 If the plot for Hitman’s Wife’s Bodyguard were a character, it would have been shot in the head and buried in lava within the first 5 minutes. Not only is the plot bad, as the movie goes on it becomes clear that it was bad on purpose, as evidence of a heavy-handed, early 007 approach to the villain and his evil plan. The villain even gets an over-the-top name: Aristotle Papadopolous. Fortunately, there is very little time wasted on the plot scenes.

But wait. Maybe what we think is the plot isn’t really the plot.


More on that later.

If you’re going to see this movie, or have already, you clearly based that decision on the cast and their chemistry. And there was plenty of that. Ryan Reynolds and Samuel L. Jackson are hyper-reactive. Toss in Salma Hayek and you have a hypergolic mix.

(Hypergolic propellants are used in a rocket engine because the components spontaneously ignite when they come into contact with each other.)

There are numerous laugh-out-loud moments that increase in frequency and intensity as the movie progresses. That’s really the reason to see this movie.

Also: keep a lookout for Gary Oldman. Apparently, he’s in the movie. I know he’s a chameleon, but this is ridiculous. Personally, I think his role was edited out and hopefully we’ll see it in a future director’s cut. If you spot him, let me know down in the comments.

Also, also: Keep an eye out for one really subtle, but funny line. I didn’t pick up on it until I was reading my notes for the Peetimes, but in one scene Darius (SLJ) needs to make a phone call so Michael (Ryan Reynolds) gives him his phone and says, “Make it quick. I don’t have a long-distance plan.” What’s funny is that Ryan Reynolds is a spokesperson and part owner in Mint Mobile.

The Plot. No, not that plot, the other plot.

I don’t want to spoil anything for you so I’m not going to just give it away. But the plot that involves the terrorist computer virus isn’t what you should be looking for. There’s another more subtle plot going on that I wasn’t really aware of until the very end.

Not getting the plot until the very end will make rewatching the movie that much more enjoyable in the future. Especially if Gary Oldman’s scenes are added. But if you don’t think you’ll ever get a chance to rewatch this movie and you want to know what to look for, then click the spoilers link below.

Plot (Spoilers)
The real plot to keep your eye on is the fact that Sonya (Salma Hayek) and Darius (Samuel L. Jackson) want to have a family. Eventually, we discover that Darius may not be capable of upholding his end of the responsibility and so he suggests adoption.

Add to that many scenes during the movie where Sonya treats Michael (Ryan Reynolds) in a motherly fashion, and it should be evident where this bit of the plot is headed.

About The Peetimes: I have 3 Peetimes for this movie, but you should really only consider the middle one. The other 2 are for emergencies only.

There are extra scenes during, or after, the end credits of The Hitman’s Wife’s Bodyguard. (What we mean by Anything Extra.)

chevron_left RunPee Weekly Newsletter #66 (June 16, 2021)
Is there anything extra during the end credits of The Hitman’s Wife’s Bodyguard? chevron_right