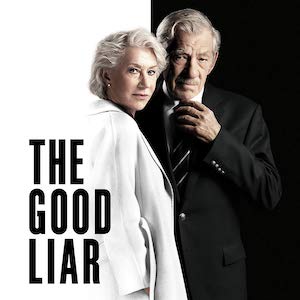 Mirren and McKellen are the Crown Jewels of British drama. Seeing them together is a treat which I can’t believe has been so long coming. Then there is Russell Tovey, who has got hours of TV screen time racked up on this side of the pond and should be in a lot more films as well.

The story itself rattles along at a fine old pace and the flashback scenes show there is a lot more going on behind how the characters are behaving and what they are saying. As Betty (Mirren) says at the end, “it’s deeper than it looks,” especially if all you’ve seen are the trailers!

About The Peetimes: This genre of movie thrives on leading the viewer astray, and it is easy to lose track if you’re not paying attention. However, I think I’ve got some Peetimes that can be easily summed up or don’t really drive the story along.

There are no extra scenes during, or after, the end credits of The Good Liar. (What we mean by Anything Extra.)

Rated (R) for some strong violence, and for language and brief nudity
Genres: Drama, Thriller