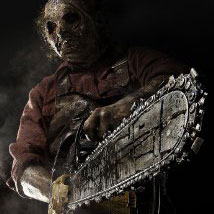 I was pleasantly surprised with the latest attempt at the Texas Chainsaw phenomenon. Being ruled by the darker side of my personality I find it almost impossible to pass up these movies. I wasn’t expecting much out of this one but I most definitely walked away pleased. Don’t get me wrong..it wasn’t terrific. There were a lot of plot holes and the predictability scale was off the charts. For the first half of the movie the crowd already knew what to expect before we saw it. That being said, the last half of the movie was immensely enjoyable. You know when you’re sitting at the movie and there are characters that you want to see die a heinous death? Well, you’re gonna get that and then some. I always go see these types of movie at the late show because a fairly large percentage of the people present are to say the least, a bit tipsy. So when these characters, that deserve to die for being so incredibly stupid die..as the saying goes, “And the crowd goes wild!!” I love those moments,  I counted five different times that the very large football player looking guy in front of me jumped and let loose with a stream of profanities admonishing the stupidity of the victim. Thinking back on the movie my favorite part was watching the crowds reaction.

The movie itself starts at the end of the original movie and then transitions into this storyline. I liked the way they did it. Luckily I am old enough to remember the ending of the original, I had to explain to my twenty year old daughter that what she was seeing was the original ending from 1974. I may have only been a year old when it came out but I’ve got an incredible memory. I would recommend watching the first one before you see this one. Not that you wont understand whats going on but because it would provide a richer experience.

I’ve read a few other reviews and I’m happy to see that none of them have spoiled the surprising ending. I’m sure that somewhere out there are some spoilers but try and stay away from them. I got tired of researching the movie and plus I’m on a deadline here! Long story short, don’t try and figure out the ending..just go watch it and be surprised.


I just want to add one more thought here. Recently some of my reviews have been picked apart by certain people. This review is just my personal opinion of this movie. I’m not saying I’m right or wrong, it’s just my opinion. Take for instance the underwear I’m wearing right now are super comfortable…on me. That doesn’t mean that my underwear would be comfortable on everyone else out there. Its all about personal preferences.

About The Peetimes: Since the movie was so short I only submitted one pee time. The time that was selected has been featured in the movie trailer’s that were running at the theaters and on television.

There are extra scenes during, or after, the end credits of Texas Chainsaw 3D. (What we mean by Anything Extra)