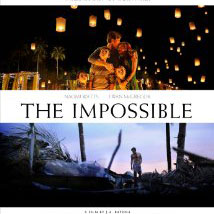 The Impossible isn’t a fantastic movie my any means. But it’s certainly an entertaining dive into the tragic story of one particular family’s experiences in one of the worst natural catastrophes in human history.

It’s important to know that this isn’t an *Hollywood* movie. It is a Spanish production – written by Sergio G. SÃ¡nchez and directed by Juan Antonio Bayona. That isn’t at all obvious when you see it, however, I felt the movie had a more *honest* tone to it than most Hollywood movies do and now I know why.


There is no doubt that this is a disaster story but they don’t try and build a since of impending doom. No one in the story knew the tsunami was coming and so the story plays it the same way. You don’t know when the tsunami is going to hit until it hits. If you were to show this movie to someone who had no idea what it was about they would probably think it’s going to be a story about marriage infidelity or kidnapping, etc. There’s no expectation for what’s about to happen. Unlike how many Hollywood stories are told.

Naomi Watts and Ewan McGregor were fantastic choices for the husband and wife. They both have gripping emotional scenes throughout the movie and of course you won’t know who survives and who doesn’t. Just like the real people who experienced this tragedy.

As good as the movie is I don’t think it’s a must watch for the theater. You’ll get just as much out of it watching it on DVD in a few months. Perhaps more if you have a family to watch it with and then talk about afterward.