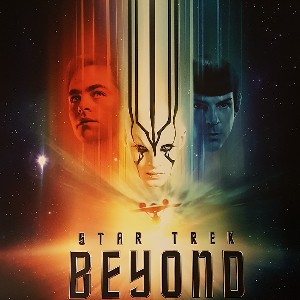 I’m a big ST fan. I’ve watched all the TV series and all the movies. So I’m going to come at this review as a fan, not a casual moviegoer.

Plot (Spoilers)
After stopping off at Starbase Yorktown, a remote outpost on the fringes of Federation space, the USS Enterprise, halfway into their five-year mission, is destroyed by an unstoppable wave of unknown aliens. With the crew stranded on an unknown planet and with no apparent means of rescue, they find themselves fighting against a ruthless enemy with a hatred of the Federation and everything it stands for. Only a rebellious alien warrior can help them reunite and leave the planet to stop this deadly menace from beginning a possible galactic war.

All of three Abrams’ Star Trek movies have been well received by the critics and audience, so we can at least say that we’ve broken out of the cycle where every other ST movie sucked. 🙂

The Best of the Kelvin Timeline Star Treks?

ST: Beyond isn’t perfect by any means, but I think it’s the best of the Abrams ST, and I think the reason why is that Simon Pegg (Scotty) is one of the principal screenwriters. This movie, more than any of the others, has great character moments that begin to define the Kirk, McCoy, and Spock triangle that we expect.

To be fair, it’s difficult in the reboot because we already know what the relationships between the trio should evolve into: the first two movies didn’t have the opportunity to get there. At the time I was bothered by that, but in retrospect I understand that they were taking their time, letting the relationships evolve. In this movie, we get the scenes that lay the foundation for the bonds they forge.

Aside from that, the movie was pretty good. I’m not happy with the story behind the “ancient weapon” and such. It feels like they were treating it similar to how Marvel treats the Infinity Stones. You kind of want to say, “Look, if this thing is so stinking dangerous, then why didn’t you just drop it into a star? Problem solved.” I get it that the plot needs this uber dangerous weapon that can fit in the palm of your hand, but it just didn’t feel Star Treky. Maybe I’m just being too picky. You tell me.

The movie has ample humor. I would have been disappointed if it hadn’t.

About The Peetimes: All of the Peetimes in this movie are pretty good, but I would suggest using either the 1st or 3rd Peetimes. The 2nd has the most character involvement. The movie goes into “Shields up! Red Alert!” mode right after the 3rd Peetime and doesn’t let up until the end.

There are no extra scenes during, or after, the end credits of Star Trek Beyond. (What we mean by Anything Extra.)