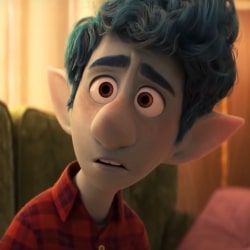 Onward is a Pixar film set in a suburban fantasy world about two brothers, Ian and Barley (voiced Tom Holland and Chris Pratt respectively), on a quest to reunite with their deceased father. Also voicing characters in the movie are Julia Louis-Dreyfus as Laurel Lightfoot, the mother, and Octavia Spencer as Manticore.

Onward is written and directed by Dan Scanlon, who also wrote and directed Monsters University and was part of Pixar’s senior creative team behind Toy Story 4, The Incredibles 2, Coco, Inside Out, Brave, and Cars.

There’s a widely popular fan theory revolving around the Pixar movies, creatively called The Pixar Theory, that proposes that every Pixar movie, from Dinosaurs  to Toy Story 4, are all set in the same universe.  If you’re a big Pixar fan, and have 26 minutes to kill, I highly recommend the video below. It will make you rethink every Pixar movie. (And the witch in Brave… will blow your mind.)

It will be interesting to see how OnWard fits into this theory. Maybe it breaks the theory, or maybe it will definitely resolve the questions. We’ll soon find out.