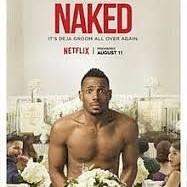 Another Groundhog Day themed film to discuss! As often with this trope, Naked takes a while to get going. Eventually you settle into the rhythm of the repetition and drop a few giggles along the way. With Groundhog Day movies, something has to happen in order to move the day forward, and that something resets the day upon each failure.

Like the new flick Palm Springs, this time travel loopscape takes place over and over again on a wedding day, but this time the protagonist is the actual groom. And he’s…naked. (NOTE: In a tasteful way.)

A silly, but worthwhile addition to the Groundhog theme

Marlon Wayans plays Rob, a hapless, devil-may-care dude who’s ‘marrying up’. He isn’t extremely sympathetic at first. That’s nothing new. There’s also a silly vibe to the whole thing that isn’t very engrossing until about a third of the way through. It was about when Rob makes it to the wedding with a mushed up arm (don’t ask), high on prescription Ambien, that I relaxed into the wackiness. It took a while, but Wayan’s natural charisma emerged, breaking though the ‘OMG nude!’ story conceit for the rest of the narrative.

With 23+ shows featuring a Groundhoggy theme and counting, I’m picky about how things wrap up. In each Groundhog Day (GHD) narrative, at some point the character is able to escape the loop and move onto the next day. And while I’d be interested to see a GHD theme where the protagonist NEVER gets out, I still want each resolution to be creative. It needs to add something to the sub genre.

To break out of the cycle, the hero has to do something right: have a perfect day, be a nicer person, foil a bank robbery, sell a mummy hand, choose the other option, get laid, solve a murder, learn quantum physics, save the world, or run a whole lot.

In Naked, Rob has to get married. Essentially, he has to show up. Simple, right?

But there are so many small obstacles in the way (unprinted programs, bad fonts, pigeons in the chapel, lack of tux/ring/vows) that we, and Rob, get caught up in the minutia. In the original Groundhog Day, as well as Been There, Done That in Xena, the protagonist has to somehow solve everything. Given enough time, all these hurdles can be managed in one day, right? Duck here, run there, avoid the puddle. Etc.

I like that in Naked, none of those things ultimately matter. We spend a long time thinking they do. Naked’s subverted ending is more equitable and satisfying than one might expect. There’s a solid life lesson baked in, but the flick doesn’t hit you over the head with it.

Also, the father of the bride is the Allstate Insurance Man. He never says, “Are you in good hands?” but it’s impossible not to think it.

I’m giving this an earned B- since Naked isn’t trying to be deep, and succeeds as a cute, zany comedy with a now-familiar theme. Is it great? Hell, no. But I was ‘infinitely’ amused once I let go of logic and allowed the crazy to wash over me.

chevron_left Pandemic got you stressed? Self-Care Strategy
Is there anything extra during the end credits of Tenet? chevron_right