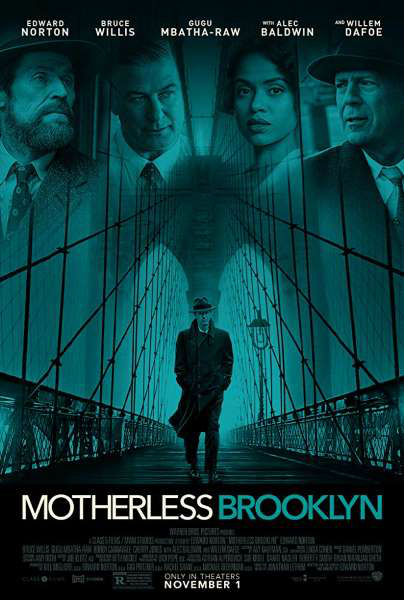 It seems clear a lot of critics like this movie. I’ll go along with this to an extent — it’s clearly a labor of love for Edward Norton, who not only managed every aspect of the film and starred in it, but did some excellent research on the mental illness of Tourette’s Syndrome.

One of my early jobs involved working with the mentally ill, including those with Tourette’s, and Norton hit all the right notes. His character was whip-smart in spite of his disability. Lionel was aware of his affliction and apologized for his inappropriate outbursts. That his crew called him “Freakshow” was just a sign of the times in the 1950s, where it was acceptable to be casually cruel. It also served to underline the love between Frank (Bruce Willis’s character) and Lionel. Frank called the orphan under his wing “Brooklyn” — a much more affectionate term.

The historical period setting looked great too, although I’m not a fan of washed out bland palettes blended with noir. This was by no means a pretty film — and not intended to be — but two and a half hours of gritty, dreary grayness grated on my nerves.

What else can I add? Motherless Brooklyn was well-acted by everyone (although Alec Baldwin leaned a bit heavy on his SNL Trump act), well-written, and about a topic that absolutely bears both scrutiny and a relevance for our time.

Except. Except, yes, I was bored silly. I’m starting to find drama films less appealing than horror, and for me that’s saying a lot. I have a degree in Conservation Biology and am a staunch Humanist, so I feel deeply about the routine abuse of our peoples and planet by those in power. But I don’t want to wallow in a movie about it. I want my entertainment choices to lift me up, not drown me in despair.

If you want to feel sad about humanity’s mistreatment of marginalized people, this film will be right up your alley.

A fun time at the theater, it most certainly is not.

About The Peetimes: I’ve got 3 Peetimes pretty well spaced out. The 1st and 2nd are really good, and the 3rd is your last chance to go before the final hour.

There are no extra scenes during, or after, the end credits of Motherless Brooklyn. (What we mean by Anything Extra.)

Rated (R) for language throughout including some sexual references, brief drug use, and violence
Genres: Crime, Drama, Noir