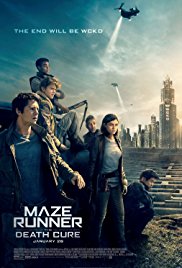 I’m a huge fan of dystopian stories, and I liked the first Maze Runner book and film (the one that had an actual maze and runners). It was a fresh and intriguing idea.

I didn’t see the second, and I was definitely lost in this third movie.[pullquote position=”right”] Maybe the story was incoherent no matter what[/pullquote], but neither I nor my companion (who hadn’t seen any of the movies in this franchise) really followed much of the plot. It was, quite frankly, a hot mess.A long, drawn-out, senseless muddle, where you don’t get to know any characters at all, much less care what happens to them. There are chase scenes, there’s a cure, there are double crosses…with more chases, more convoluted details…and never a moment to catch your breath or follow any character’s point of view. It’s also possible that the theme of Young Adult Dystopias is played out. (We’ll always have The Hunger Games to savor.)

This 3rd #MazeRunner is really for completists only…I’m a YA dystopian fan, and even I had a hard time relaxing into this chaotic film. Do you agree with our RunPee Rating of D+? https://t.co/pqybo4Knwq

This one should be a cautionary tale on how NOT to make a movie. In spite of that, the 8pm and 9pm showings of Maze Runner 3 were sold out at my theater. Yep.

This might be my shortest review ever. I can’t think of anything to discuss. It was a good-looking film, I’ll give it that. This one is for Maze Runner fans only, and series completists. At least they didn’t divide the last book into two films. So it’s got that going for it: Divergent fans will probably never get their final film.