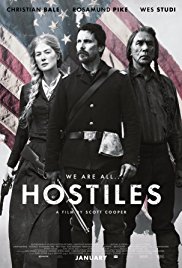 This is a sad, slow, and brutally violent film. A lot of deaths occur with regularity, and they don’t spare the viewer the ugliness of it. People scream, cry, wail, and lose their minds. The soldiers dig a lot of graves.

There’s also very little conversation. While a lot of plot happens, watching Hostiles is still an interminable, funereal slog, full of torture, rape, killings, and makeshift memorial services. Who exactly are the titular “Hostiles”? [pullquote position=”right”]It’s clear that both sides in the conflicts of the Western Expansion can shoulder the blame.[/pullquote] With Den of Thieves from last week, this is now two consecutive movies where a knife blade’s width divides the good guys and the bad. I don’t think this is exactly a fresh theme, but the message is clear and well-told.

The director took his time to develop the story, which is one good thing. The music and location settings (in New Mexico and Colorado) were also nicely done. I can’t fault the acting in any way.


It’s just not a happy tale at all…ever. There are no moments of levity, and many grim ones. In times like these, it’s not something I’d choose for entertainment. Good production values and fine storytelling make this a better film than the usual, so I’ll give it a B.