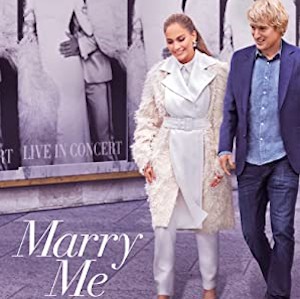 What a fun, heartfelt movie. I’ve always enjoyed J Lo’s movies and this one doesn’t disappoint. The music was great and the acting was terrific. Owen Wilson played his role perfectly and the chemistry between the two was spot on.

I loved the supporting cast, they gave me a warm fuzzy feeling. Sarah Silverman added a goofy, fun-loving role that added another level to the movie. Also, Stephen Wallem, even though I’ve never heard of him, was fun too. He has a small part but brought a big performance.


The outfits were awesome. Jennifer Lopez has such an amazing glow that it’s hard not to stare at her.

This is a great romantic comedy, so if you’re wondering where to take your Valentine’s…Marry Me is a really good choice.

About The Peetimes: There are a lot of moments that would be easy enough to run out for a quick break. There are many song/singing scenes, however, I felt it was best to let you know about those and let you decide which song you could skip.

There are extra scenes during, or after, the end credits of Marry Me. (What we mean by Anything Extra.)

Plot
Kat Valdez is half of the sexiest celebrity power couple on Earth with hot new music supernova Bastian. As Kat and Bastian’s inescapable hit single, “Marry Me,” climbs the charts, they are about to be wed before an audience of their fans in a ceremony that will stream across multiple platforms. Divorced high-school math teacher Charlie Gilbert has been dragged to the concert by his daughter Lou and his best friend Parker Debbs. When Kat learns, seconds before the ceremony, that Bastian has cheated on her with her assistant, her life turns left as she has a meltdown on stage, questioning love, truth, and loyalty. As her gossamer world falls away, she locks eyes with a stranger-a face in the crowd. If what you know lets you down, then perhaps what you don’t know is the answer, and so, in a moment of inspired insanity, Kat chooses to marry Charlie. What begins as an impulsive reaction evolves into an unexpected romance. But as forces conspire to separate them, the universal question arises: Can two people from such different worlds bridge the gulf between them and build a place where they both belong?