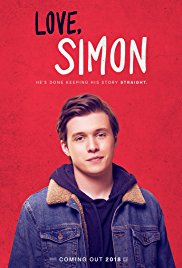 What a great little film. This was like a John Hughes classic from the 1970s, updated for our era of cell phones and Facebook, featuring a coming out plot that’s worthy of the premise.

The actors, the soundtrack, the goofy high school hijinks and wonderfully iconic scenes…it added up to a fantastic nostalgia trip that today’s young people can relate to and call their own. Great humor and pathos. I felt for Simon’s predicament, even though — be real — who hasn’t had intense teen emo experiences? As Simon’s friends properly point out, he’s not the only one dealing with confusing, painful problems. [pullquote]This is ultimately not about sexual orientation, but alienation of all kinds.[/pullquote]

These kids come from privilege (each home is a mansion), but tolerance knows no income, color, gender, or sexual orientation. Race is (mostly) a non-issue in the narrative, focusing mainly on Simon’s angst. And if you’re wondering, there’s no teen sex in this movie; kissing scenes are as far as things go.


Thankfully, the coming out story isn’t a suicide scenario. Simon’s family and friends are smart, thoughtful people. I say this so you don’t worry about coming home from the theater in tears. Remember — it’s a light John Hughes-type flick. Hughes wanted you to laugh, fret a little, and feel positive in the end. Mission accomplished.