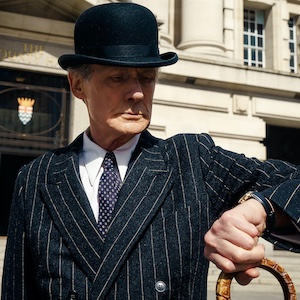 Not every remake of a Japanese film has to be a horror, sci-fi, or action story. Godzilla, The Ring, and The Magnificent Seven may be the best known English language remakes of Japanese films but they don’t have to be loud, brash, and adrenaline fuelled to be considered for a language switch remake…Living proves the point beautifully.

Ikiru is a 1952 Japanese film directed and co-written by Akira Kurosawa. Apparently, Kazuo Ishiguro had long hoped to make an English language version with Bill Nighy as the lead. One night Mr & Mrs Ishiguro shared a taxi with Bill Nighy and, during that ride, Kazuo pitched the idea to Him. Bill Nighy had never seen Ikiru but signed on as soon he’d managed to get to see it.


We Can Keep It Here It Can Do No Harm

Living is the story of a local government official, Mr Williams (Bill Nighy). He has a dull job, near the top, in the planning department. This mainly seems to involve passing files from one department to another. The main aim of this is to make the affected members of the public think that action is being taken while actually doing no real work and spending none of the department’s budget.

At the beginning of the film a group of three women turn up at the planning department. They have a file containing a petition and a proposal to turn a bomb site into a children’s playground. The women get sent from department to department; planning to sanitation, to leisure, to education, to finance, to parks and gardens, and, finally, back to planning. Here, Mr Williams puts the file in the middle of a big pile of similar files with the words “We can keep it here. It can do no harm.”

I Don’t Have Time To Get Angry

But then Mr Williams gets some bad news…he has cancer and it is terminal. He tries to go on a self-pitying, hedonistic binge until he realises that he doesn’t know how to! But then he bumps into a former planning department colleague, Miss Harris (Aimee Lou Wood). She shows him that there is still a reason to live. To do some good, and get some pleasure out of living. Mr Williams decides he is going to one good thing before the inevitable end.

Bill Nighy is, as usual, wonderful. He is the epitome of a man beaten down by circumstances. By being a widower, being in a dead end job, living with a son and daughter in law who are just interested in their inheritance, and, finally, being ill. He is delightfully uncomfortable in his interactions with Miss Harris; everything is perfectly innocent but  people are keen to see the worst of his simple desire to spend time with someone vivacious in the hope that a bit of life can rub off onto him.

Mr Williams Is A Little On The Frosty Side

The whole feel of Living was like a gentle, kind hearted film from the fifties. I half expected to see “Directed by Frank Launder and Sidney Gilliat” or “Produced by Michael Balcon” to pop up during the opening credits. I couldn’t tell whether the establishing shots of fifties London were newsreel footage, specially shot, or computer generated. The whole film has a slight soft focus feel about it. It’s presented in a 1.48:1 aspect ratio reminiscent of the films of the era. For comparison, Black Panther: Wakanda Forever was shown in 2.39:1.

In short, this was a lovely film. Bill Nighy gives one of his best ever performances and he is ably assisted by the rest of the cast and crew. It is an uplifting and life affirming film which I wholeheartedly recommend and not just because I’m a fan of Bill Nighy. I am interested in seeing Ikiru if only to see what the extra forty minutes run time consists of.

chevron_left Is there anything extra during the end credits of She Said?
Christmas Movie Review – Spirited chevron_right