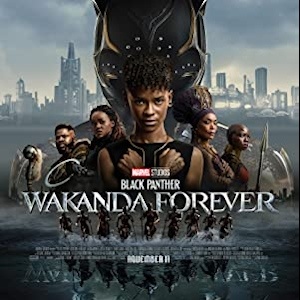 I wanted to love this movie. But it just never happened. I think it’s like watching a horse race. Your horse starts out in the middle of the pack, and all race long you keep waiting for him to make his move. But in the end your horse finishes in the middle of the pack, out of the money. (Note: I’ve never watched a live horse race so I may not have a clue what I’m talking about. But the analogy seems solid.)

There are too few scripts that give female actors a chance to display their gravitas, but this one did and Angela Bassett delivered. More than once I might add. She feels like a superhero when she lowers her voice and lays down the law.

I think Tenoch Huerta gave an excellent performance as Namor. Some of the credit goes to the writers—Joe Robert Cole and Ryan Coogler—for making his character more than just a typical villain trope. Both of the writers worked on the first Black Panther which has one of, if not the best, villains in the MCU. Villians are very hard to get right. You’re two for two. Nice work.

The conflicts it the movie are clear and each character has well-defined motivations that they stay true to.

Long bits of the movie felt tedious. Pretty much the entire middle of the movie just plodded along. If I had to put my finger on it I’d say that adding the Riri Williams (Ironheart) character was more of a subtraction to the movie than an addition. I guess Kevin Feige (President of Marvel Studios) didn’t want to give her her own origin story TV show/movie, which is a shame. But her role felt forced into a movie that would have worked just fine without her.

I’m going to nitpick, but it’s my review so… When Riri meets Shuri she says that she has to get to her Differential Equations class. It sounds good, but a good technical advisor would have known that she would have needed to know differential equations years earlier based on the engineering work she’s already done. Something like Topology or Abstract Algebra would have been more appropriate.

Letitia Wright did an okay job with her role, but in too many scenes it felt like she was carrying too much weight.

How NOT to level up a character

Upgrading a character’s powers/abilities or equipment is tricky storytelling. A good example of how not to do it is Okoye’s suit upgrade. Shuri just gives it to her. To make matters worse, when Okoye first sees it she dismisses it because she doesn’t like the way it looks. Do you think they would do that if Okoye was a male character getting a suit upgrade? Doubtful.

Okoye doesn’t sacrifice anything; she doesn’t work for it; she just gets it because she lost a fight and needs to level up for the movie-ending battle. That’s weak sauce.

(Spoilers ahead. You have been warned.)

Few movies have faced as much pressure to deliver as this one. The anticipation of passing the torch after the tragic passing of Chadwick Boseman was immense. In my opinion, they didn’t screw it up, but there was a lot of room for improvement. Choosing Shuri was the safe choice, and was the one I was hoping they would avoid.

When the time came it made no sense to the plot that Shuri alone took the heart-shaped herb. They were about to go into battle with a superior force. How about heart-shaped herb for one and all? At the very least give it to more than just Shuri. Riri even asked, “Can I have some of that?” They could have at least given it to Nakia and maybe M’Baku. And if they wanted to do something absolutely unexpected then maybe add a scene where Agent Ross just takes a sip of it. Sacrilege? Maybe. But oh my goodness the fun they could have with that if he was just a tiny bit boosted.

About The Peetimes: We have two Peetimes submitted by Shanee Edwards, a movie critic who has access to pre-release screenings. I’ll update and add another Peetime, or two, Thursday evening after I see the movie.

There are extra scenes during, or after, the end credits of Black Panther: Wakanda Forever.

Plot
The nation of Wakanda is pitted against intervening world powers as they mourn the loss of their king T’Challa.

chevron_left Best Of British Biographies – Leslie Phillips
Is there anything extra during the end credits of Black Panther: Wakanda Forever? chevron_right