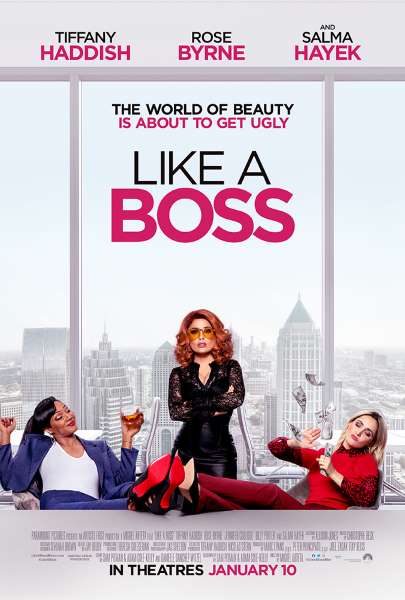 Tiffany Haddish is the MVP. She’s very droll. Salma Hayek is amusing as Claire Luna (“Clear Brilliant Moon”), but overshoots her character to the point where you can’t take anything she does seriously. There’s just zero jeopardy — although Hayek seemed to enjoy herself. So there’s that.

Rose Byrne is unfortunately forgettable as Mel, and I don’t really buy M&M’s close friendship. In real life, I would think Mia is too cool and Mel is too awkward. Or at least that’s how the films sells it.

I enjoyed the interesting take on the makeup biz, and there are actually some decent ideas: the One Night Stand makeup kit, the idea of two lipstick choices in one, and the ‘twin makeover’ contest. There’s a good dog penis gag (there’s a sentence I never thought I’d write). I won’t give it away, but if you’ve ever had a boy dog, you’ll understand.

Since the film premiered a day early (sometimes this happens and we never know why), the showing was totally sold out. The audience had fun, so I think it hit the target of being pleasant, fluffy, amusing fare. There are a ton of female friendship comedies just like this out there, and there will undoubtedly be more of them.

Overall, Like a Boss is exactly what you’d expect from the trailers, but it’s not worth a $15 movie ticket (unless you’re up for a non-demanding girl’s night out at the movies).

Note: I went from this to seeing Ford v Ferrari, and that really wasn’t fair to Like a Boss. #FvF is just that good.

About The Peetimes: I gave you 2 good, if short, Peetimes. One is in the beginning of the movie and the other is near the end. Since the movie is not very long, either one should do. I avoided the best scenes containing humor/mayhem/general wackiness.

There are no extra scenes during, or after, the end credits of Like a Boss. (What we mean by Anything Extra.)

Freebies and Swag from Opening Night of Like A Boss