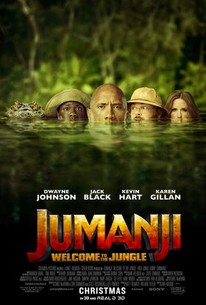 This sequel version of Jumanji is adorable and funny. Predictable, yes, but the story is based on a video game plot, so it’s kind of a baked-in thing.

It’s also bit too pat in how each teenage character gets the perfect game avatar to grow as a person, but this is yet another thing that can be explained away in-universe: it’s a magic game, and that’s what it does. So I guess we can make allowances for this too. It’s all in good fun to service the adventure story.

This movie is very like a fantasy-version of The Breakfast Club, updated for the cell-phone/video game era. It’s got detention, stereotypical teens from different cliques, and the theme is an exploration of how their characters learn to work together. They become close through their experiences. So, yeah, the same concept.


The plot is paper-thin, which is, again, part of the conceit. What the film really sells are the sweet character interactions, tons of gorgeous visuals, lots of humor, and the swashbuckling tone. I’ll say it: this could become a lightweight adventure/humor classic. We’ll see, over time. The audience enjoyed it — they were laughing and clapping throughout. There’s also a good message for young people about tolerance and acceptance. Nothing world-changing, but I’m glad I got to see this.

Everyone in the film was just great — the actors seemed like they had a blast. Jack Black was fantastic, and I normally don’t enjoy his brand of broad humor. He had the obviously funny part but didn’t oversell it, even when teaching “Martha” how to flirt. Dwayne Johnson was super playful and pulled off a believably bashful teen. Kevin Hart was a crack-up as the “backpack guy.” Karen Gillan has nice comedic timing, and it was good to see her actual face without the blue makeup of Nebula from Guardians of the Galaxy. At some points she still channeled Nebula, but her physicality as a warrior served her well in both roles. Everyone played off each other very well. The ensemble was just too damn cute, and they knew it.

Do you need to see the original Jumanji to follow along? In a word, no. Somehow the old one never pinged on my radar. I think I should catch it now; Jumanji 2 was that much fun. I laughed almost the whole time and enjoyed these veteran actors doing their campy best of reviving the old “body swap” tale. It made me forget about life for a few hours, and that’s what a movie can do at its best.

Movie Grade upon rewatching: A

July 2021 Updates: I’m bumping up this movie into the A range. It’s worn very well since 2017 and has a lot of classic lines and moments. It’s my favorite 2017 film, actually.

I recently watched the original Jumanji with Robin Williams (RIP), which I didn’t think was very good. Also, there’s a 3rd Jumanji movie out now (The Next Level), which is watchable but doesn’t approach the level of madcap fun in Welcome to the Jungle. Here’s the links for our reviews, plus the new Jungle Cruise, because, you know, this is what The Rock does best.