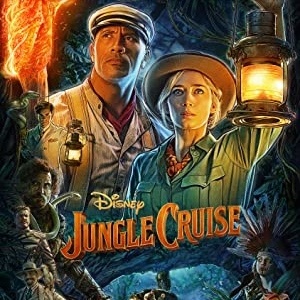 I don’t know about you, but Jungle Cruise reminds me an awful lot of Disney’s other theme park movie inspiration: Pirates of the Caribbean. I distinctly remember the first time I saw a movie trailer for Pirates and I thought to myself: OMG, you can’t be serious. This is going to suck. And then we saw the movie and were blown away.

Plot (Spoilers)
Based on Disneyland’s theme park ride where a small riverboat takes a group of travelers through a jungle filled with dangerous animals and a supernatural element.

As much as I hoped it would be, Jungle Cruise isn’t that good. But, it’s at least as good as the best of the Pirates of the Caribbean sequels.


The best part of Jungle Cruise is the humor, and there’s quite a bit of that. The action is good, but sometimes, especially early in the movie, it felt forced. Like they realized the action quality wasn’t great, so they made up for it by adding more quantity. They went right to the edge of too much, but not over it.

Emily Blunt shows why she’s a great actress–she really had to elevate her character. A less talented actress would have been exposed and this movie would have suffered for it.

And then there’s Dwayne Johnson, who was his typically charismatic self. Definitely one of his more enjoyable roles and the kind he is perfectly suited for. He’s not nearly as good in serious roles.

Jack Whitehall plays MacGregor—Emily Blunt’s brother. He definitely deserves a shoutout because his character could have been really annoying, but instead, he was very enjoyable. Kudos to the writers for taking his character where they did—you’ll find out. That was tastefully done.

This is a great family movie. It’s not really a kid’s movie, but kids will love it and it has plenty for mom and dad to enjoy (instead of simply enduring it).

The one thing I found a little disconcerting was some of the violence, especially when the natives were involved. There was one action sequence where it seemed like many natives died or were seriously injured. It really felt out of place in a Disney movie. Like just because they’re natives, and just because they don’t have speaking roles, doesn’t mean you get to kill them without at least a little drama. Instead, it seemed their deaths just didn’t matter at all. Not cool.

About The Peetimes: We tried to avoid including any of the humor and action in the Peetimes, which was hard because there was a lot of action and humor. I think the 2nd and 3rd Peetimes are best. The 1st Peetime was added as an emergency only, just in case you can’t hold it for 10 more minutes to the 2nd Peetime.

There are no extra scenes during, or after, the end credits of Jungle Cruise. (What we mean by Anything Extra.)

chevron_left RunPee Weekly Newsletter #72 (July 28, 2021)
Is there anything extra during the end credits of Jungle Cruise? chevron_right