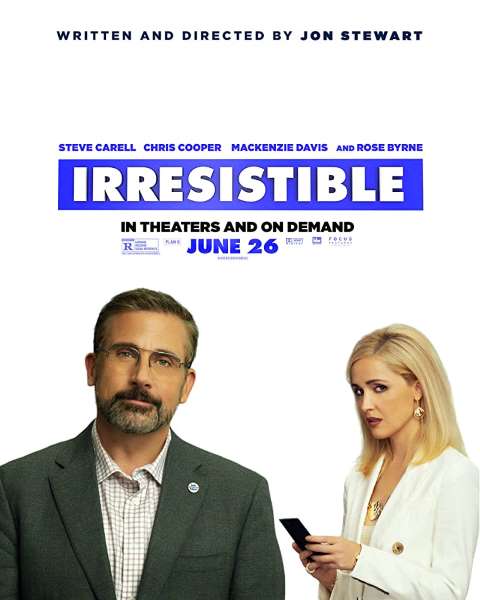 I like Steve Carell, most usually in his comedy roles. (I thought the American version of The Office went downhill after he left). He’s also good in his dramatic turns. The Big Short, Marwen, and The Morning Show all were excellent and gave him a chance to show off his serious chops. Add to that — Irresistible is, at one hour forty, a relatively short film — then I wasn’t too worried about any commitment issues.

So how was Irresistible?

Well, I know I’m probably the soft touch when it comes to grading films: I half think that Jill’s recent articles on how movies earn A or B grades were aimed at me to try and make me buck up my ideas, but I found myself thinking that there was something missing. It’s a shame really, because it should have been fantastic. I like political themed films and TV shows, such as The West Wing, House Of Cards, Wag The Dog, The Death Of Stalin, and Primary Colours. I was expecting Irresistible to join that group.

I mean it should do! Steve Carell, Rose Byrne, Chris Cooper, and Mackenzie Davis having words put into their mouths by Jon Stewart… It should have been amazing. But in fact it was only adequate. There were flashes of humour but, sadly, they were few and far between. The twist at the end was telegraphed as soon as the polls opened. There were times when it threatened to fall into mawkish sentimentality. The best part by far is the representation of the opposing strategists (Carrell and Byrne) and how they use and are used by the media. Sadly, those bits aren’t satire.


Not bad, not good, just middling and a bit of a disappointment.

About The Peetimes: I found two decent Peetimes for this movie.

There are extra scenes during, or after, the end credits of Irresistible. (What we mean by Anything Extra.)

chevron_left RunPee Weekly Newsletter 16th edition (July 1st, 2020)
Is there anything extra during the end credits of Irresistible? chevron_right