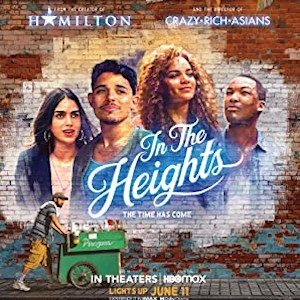 Ignoring the song and dance for a moment, I found the story to be about as predictable as a child’s fairy tale, and in a way that’s how the story is presented as the movie opens with the main character telling the story to a small group of children.

Plot (Spoilers)
In the Heights centers on a variety of characters living in the neighborhood of Washington Heights, on the northern tip of Manhattan. At the center of the show is Usnavi, a bodega owner who looks after the aging Cuban lady next door, pines for the gorgeous girl working in the neighboring beauty salon, and dreams of winning the lottery and escaping to the shores of his native Dominican Republic. Meanwhile, Nina, a childhood friend of Usnavi’s, has returned to the neighborhood from her first year at college with surprising news for her parents, who have spent their life savings on building a better life for their daughter. Ultimately, Usnavi and the residents of the close-knit neighborhood get a dose of what it means to be home.

However, as predictable as it is, it still feels real. Sometimes too real.

What is especially impressive is how the writer — Lin-Manuel Miranda — managed to tell the story without dragging it through the slim of politics, especially considering that this movie should have been out last year. “Dreamer” is only mentioned a few times and there is only one very short scene at a rally. It takes real talent to tell a story so wrapped up in politics without actually talking about the politics.


I am not a song and dance kinda guy. Wish I was, but it’s not in my blood. (I blame it on the 5% Neandertal.) I only say this because I don’t feel I’m a good judge of what counts as quality in this genre. All I can say is I enjoyed most of the song/dance scenes. Only a few of them felt like they dragged on too long. Most impressive was the singing. The actors they chose have amazing voices.

About The Peetimes: I have three good Peetimes that are nicely spaced. I recommend the 2nd Peetime since it’s mostly a dinner party and the only singing is to a record playing.

There are extra scenes during, or after, the end credits of In the Heights. (What we mean by Anything Extra.)

chevron_left Jump directly to Timer feature in the RunPee app
Is there anything extra during the end credits of In the Heights? chevron_right