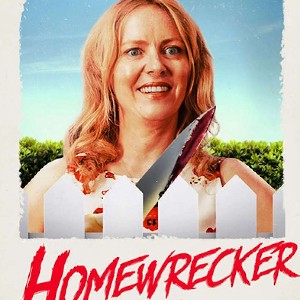 Homewrecker was a bit of a change for me… the first independent film I’d seen that had people in it that I’d seen before!  Alex Essoe, who played Michelle, was in Doctor Sleep (as Wendy Torrance no less!) and Precious Chong, who played Linda, had been in L.A. Confidential and Pearl Harbor. Besides those two, there were no other characters for 90% of the film.

So I expected a bit more from Homewrecker and, in the main, I wasn’t disappointed. It’s the story of Linda, an older woman, who becomes obsessed with a younger woman, Michelle, whom she sees regularly in her various dance and exercise classes. They meet up in a coffee shop and Linda manages to persuade Michelle to come back to her house, where the mayhem starts.

After that, the events that take place would involve so many spoilers that I can’t say too much about them. There are plenty of times when Michelle just saying, “No, go away you mad freak” would have resolved the story about ten minutes in, but this is a Canadian film and they are renowned for their unnatural levels of politeness so, maybe it’s an in-joke.


There are a couple of times when your “willing suspension of disbelief” is pushed to breaking point, or maybe it’s just a mistake.

For instance, there is a point when Michelle notices Linda is wearing her wedding ring, but when she calls her out she doesn’t check her own hand to see if it is still there, which I think would be a reflex action. Similarly, the last major violent action that Linda carries out is met with total silence from Michelle, which I can’t seriously see happening.

There is a nice homage to The Shining around the half hour mark; intentional or otherwise, I don’t know, but I guess that’s the difference between an Easter Egg and a coincidence.

But, on balance, Homewrecker was an enjoyable way to spend an hour and a bit. Well shot, well acted, well paced. It can hold its own with the other psycho relationship films… Single White Female, Pacific Heights, Fatal Attraction, etc.

It might not be leading the pack, but it’ll keep pace with the peloton.