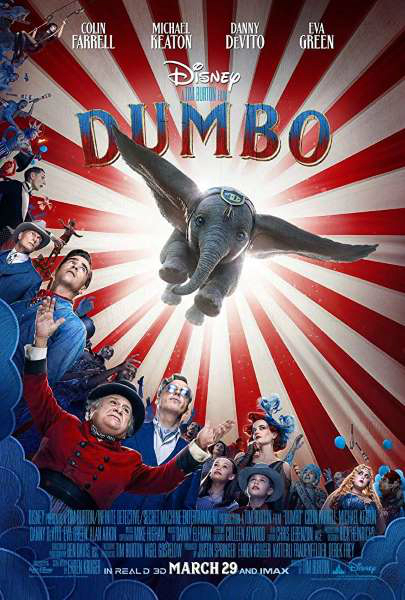 If you have a toddler, Dumbo is one of the few movies in the theater now that is specifically for your child. It’s PG-rated, so your kid won’t come home and ask you questions you don’t know how to answer. If you are worried about animal mistreatment with the circus background, by the end of the movie, they did mention no animals should be kept captive.

I was born and raised in China, and watching the original 1941 Dumbo with my dad is a piece of heartwarming memory from my early childhood. I was around 5 when I first watched it on a VideoCD. It was called “小飞象”  — Little flying Elephant — in Chinese. Yes, VCDs did exist.  🙂

Walking into the theater, I didn’t have an expectation. But as I was watching it, I was that 5-year-old girl again. The story has been changed here and there to fit the live action, but the spirit has not been changed at all. As far as I’m concerned, this movie brings back almost the same feelings I experienced over two decades ago. I’d call that a successful remake.


But for adults who don’t have any emotional connections to the original piece, this movie is probably going to be clicheic and pre-mature for you. It’s a remake that tries to be true to the original piece, so it’s still head to toe a 1940s style kids’ story. Unless, of course, you just like the idea of a cute little flying elephant.

Now here’s something extra for those who have watched the TV show West World: does the little girl in Dumbo remind you of anyone? 😉

About The Peetimes: We have a really good (recommended) Peetime right about the middle of the movie. Try to use that if you can. The last Peetime is okay, but you’ll miss a nice father-daughter scene. The 1st Peetime is only for Emergencies, because it’s short and is immediately followed by a scene that shouldn’t be missed, especially by children.

There are no extra scenes during, or after, the end credits of Dumbo. (What we mean by Anything Extra.)

She does most of the movie Peetimes with Dan and very rarely writes blogs. If you are seeing this bio, that means you have sought her out.
chevron_left The Matrix Trilogy After 20 Years – A Retrospective: Different Kind of Hero, New Kind of Science Fiction
Peetimes Coming for Avengers Endgame BEFORE OPENING NIGHT chevron_right