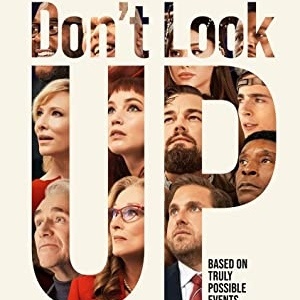 This was an A+ movie at all levels: acting, directing, story, message, humor, cinematography, wardrobe… Okay, maybe not wardrobe. But still: A+

In case you didn’t already know, Don’t Look Up is a satire on the USA’s reaction to climate change, but they replaced the climate crisis with a comet.

McKay also wrote the script for Vice, The Big Short, and Ant-Man. So yeah, he’s got game. If you want to forget that this is a satire you can still enjoy it as a comedy/disaster movie, a fairly rare genre. But the satirical elements are brilliant. It’s not just the president and pop stars that are parodied, but our modern social-media pop-culture, fed by the news outlets that are less concerned with issues and more concerned with social-media results.

The acting is great at every level; from the cameos to the main characters, everyone delivers.

During Don’t Look Up there are short sequences of nature shots that are reminiscent of the documentary Baraka. If you haven’t seen that, or haven’t seen it in a while, now’s a good time to revisit it.

Don’t Look Up is a limited release and will be available on Netflix on December 24th.

About The Peetimes: I have 3 good Peetimes. They are all pretty good, but I think the 1st one is best, unless you’re an Ariana Grande fan.

There are extra scenes during, or after, the end credits of Don’t Look Up. (What we mean by Anything Extra.)

Kate Dibiasky (Jennifer Lawrence), an astronomy grad student, and her professor Dr. Randall Mindy (Leonardo DiCaprio) make an astounding discovery of a comet orbiting within the solar system. The problem – it’s on a direct collision course with Earth. The other problem? No one really seems to care. Turns out warning mankind about a planet-killer the size of Mount Everest is an inconvenient fact to navigate. With the help of Dr. Oglethorpe (Rob Morgan), Kate and Randall embark on a media tour that takes them from the office of an indifferent President Orlean (Meryl Streep) and her sycophantic son and Chief of Staff, Jason (Jonah Hill), to the airwaves of The Daily Rip, an upbeat morning show hosted by Brie (Cate Blanchett) and Jack (Tyler Perry). With only six months until the comet makes impact, managing the 24-hour news cycle and gaining the attention of the social media-obsessed public before it’s too late proves shockingly comical – what will it take to get the world to just look up?