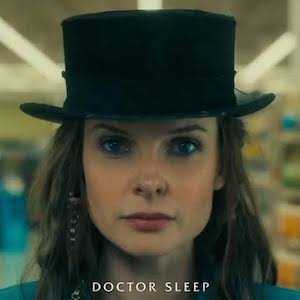 I’ll admit to being a bit dubious about coming to see this. Be honest… Did you think The Shining needed a sequel? Or worse still, something that just seemed to be using the name to attract bums on seats? In my defense, I know nothing about the alternative comic book universes so ‘Joker’ may be more relevant than I found it.

I guess the argument runs that the original source novel got a sequel, so why shouldn’t the film? The thing is that ‘The Shining’ wasn’t liked by Stephen King. Mind you it could have been a Kubrick thing; he did fall out with Anthony Burgess after making A Clockwork Orange.


The Shining was, undoubtedly, a top-notch horror film, and is more impressive for being shot entirely in-camera, being made before the age of “computer this and digital that”. However, the fact that special effects are ubiquitous shouldn’t be held against ‘Doctor Sleep’. They are used sparingly but appropriately, and I do wonder what Stanley would have done if he’d had the same access to them.

To be honest, they could have got away with using effects a lot more… Iconic Shining scenes were shot using similar actors — rather than lookalikes or digital overlays — and I think that is fair enough, given the almost forty years between the two. Most reasonable people will agree that getting someone who looks a bit like Shelley Duvall, rather than trying to shoot a digitized scene which ends up looking like a fiberglass model, is the best way ahead.

But what of the story? I enjoyed it! Ewan McGregor is always watchable and Rebecca Ferguson is excellent as the scary villain, Rose the Hat, and they are ably supported by new talent and more established faces.

I suppose the last question is: do I need to see The Shining first? As I can’t go and see it as a Shining virgin, I have to think quite carefully, and my answer would be “No.” You don’t have to see it, but there are references you’ll appreciate if you have.

About The Peetimes: There are 4 Peetimes for you, including an early one for those of you who don’t like to miss the trailers. Please note that the 2nd Peetime features torture, which some may find disturbing.

There are no extra scenes during, or after, the end credits of Doctor Sleep. (What we mean by Anything Extra.)