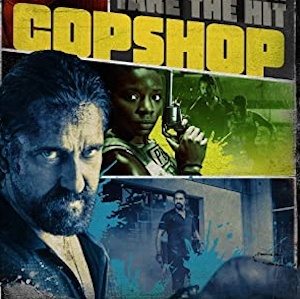 I can’t say I had any valid expectations going into the movie because all I knew of it was what I saw on the poster. I knew Gerald Butler was in it. He’s a mixed bag. I really like the actor and most of the movies he’s in, but he’s also been in a few stinkers, like GeoStorm. All I know about Frank Grillo is that he was a member of Hydra in the MCU, and he plays the American bad guy in a bunch of Chinese movies.

The movie begins in the middle of the action. It takes some time to sort out what’s going on and who’s who. I felt an ongoing sense of anticipation and wondered if the movie was going to end up being garbage or decent until about the midpoint of the movie. Somewhat surprisingly, it turned out pretty decent.


Almost the entire story takes place in the police office. It’s very constrained and isolated. By the end of the movie, there’s a very obvious Quentin Tarantino vibe. There was one other person in the theater with me and after the movie ended I asked him if he felt the same vibe and he agreed. Joe Carnahan, the director, must be a Tarantino fan. He also directed The A-Team and Boss Level—which I haven’t seen yet but have heard good things about.

A grade of B- isn’t bad at all. I felt the movie was good, but there was room for improvement. For one thing, the dialog was decent, but not great. It felt like they were trying too hard sometimes. But sometimes they nailed it. If there could have just elevated the dialog a little bit, the movie would be much better. Again, this is what I would imagine as the first draft of a Tarantino script, which is probably still better than most scripts.

My biggest disappointment in the movie is with the plot and who’s ultimately behind it all. It fell flat there because there was no relationship build-up, but I don’t want to give anything away. You’ll see for yourself.

Ultimately, if you’re a fan of Tarantino then you’ll probably enjoy this movie more than you might expect. But now that I’ve told you that, you’ll probably like the movie exactly as much as you expect. 🙂

Plot (Spoilers)
Screaming through the Nevada desert in a bullet-ridden Crown Vic, wily con artist Teddy Murretto (Frank Grillo) hatches a desperate plan to hide out from lethal hitman Bob Viddick (Gerard Butler): He sucker-punches rookie officer Valerie Young (Alexis Louder) to get himself arrested and locked up in a small-town police station. But jail can’t protect Murretto for long. Viddick schemes his own way into detention, biding his time in a nearby cell until he can complete his mission. When the arrival of a competing assassin (Toby Huss) ignites all-out mayhem, mounting threats force Viddick to get creative if he wants to finish the job and escape the explosive situation.