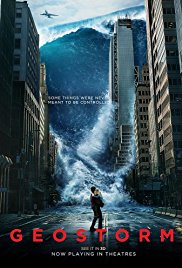 The only reason I would give this movie a C- is because the production values are decent; otherwise this movie falls flat in every respect.

The acting is forgettable. It’s hard to completely fault the actors, because the script they had to work with just doesn’t have any zing to it.

The plot was ridiculous. I guess the only good thing to say about the plot is that it’s easy to follow. But then again, why bother with a plot at all? This movie is the *Sharknado* of weather movies, but it tries to come off as something plausible, which is an insult to anyone with a brain.


As for the CGI: that was really good. There just wasn’t enough of it. If you saw the trailer for this movie then you got all the best parts.

Okay, now I’m going to be a little nit picky here. I understand that most science fiction films require at least a little bit of a suspension of disbelief. For instance, there’s no way to freeze an ocean wave just as it breaks, because, you know, ocean water is salty and so it doesn’t work that way. But whatever; it looks cool, so let’s go with it. What really annoys me is when they do stupid things that they don’t need to. Right in the beginning of the movie we see our main character in a space shuttle. At one point he unbuckles his seat belt and floats up to the window to look at the space station. The only problem is we can hear, and see, that the shuttle engines are still firing. So, the shuttle would be accelerating, and therefore he wouldn’t be able to float. He would still be pressed back into his seat. That sort of mistake is tiny, but it’s like making a grammatical error on your resume. Common, it’s really simple: get the basic stuff right.

*Geostorm* is a low-rent *Armageddon* without the humor, and *Deep Impact* without any impact. Wait for the DVD on this one.