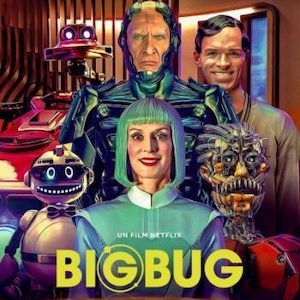 I’ve never hidden the fact that I like modern French cinema. Luc Besson has made at least three of my all time top twenty favourite films.  Another director with three in my twenty was Jean-Pierre Jeunet. I say “was” because Bigbug has joined the others to give him four. His previous three entries in my list were Delicatessen, Amélie, and Micmacs.

While Delicatessen was actually mononymous, Amélie was more fully known as Le Fabuleux Destin d’Amélie Poulain, and Micmacs was known in France as Micmacs à Tire-Larigot. Bigbug has gone back to single word basics. Incidentally, if anyone’s interested my Besson Favourites are La Femme Nikita, Léon: The Professional, and The Fifth Element.


Bigbug is set in a nearish future which has everything automated and run by advanced AI equipped androids and smart home systems. Just as Amazon and Facebook manage to show you an advert for something you’ve just mentioned to your wife, there are huge advertising drones flying around and, at exactly the right moment, they loom up at your window and tell of exactly the product you need using the voice and image of Juliette Wiatr.

Robots and androids are available in a range of appearances; from little tank like things that scuttle round cleaning up spills to life like, life size domestic servants (Monique – Claude Perron) and personal trainers (Greg – Alban Lenoir). Unfortunately, there’s an android uprising by the most advanced androids known as the Yonyx and led by Yonyx 7389XAB2 (François Levantal).

Rather than going nuclear a la Skynet they snarl everyone up in an enormous traffic jam before taking a more direct, and personal, approach. However, the domestic robots have decided to look after their human charges and put the house into a high security lock down. The house was occupied its owner, Alice Barelli (Elsa Zylberstein), her “gentleman friend” Max (Stéphane De Groodt), and Max’s son Léo (Hélie Thonnat).

Due to comedic requirements, the house has also become host to Alice’s ex Victor (Youssef Hadji), his new girlfriend/secretary Jennifer (Claire Chust), Alice and Victor’s daughter Nina (Marysole Fertard), and the neighbour Françoise (Isabelle Nanty). All the extra guests arrived mere nanoseconds before the house recognised the threat and locked them in for their own safety.

Bigbug is a visual delight. It is shot with a similar bright palette to the one used in Amélie and the house of the future is filled with clever and amusing “aids” that you might have seen in Micmacs. There is also a similar feeling to the one you got when you watched Jim Carrey in The Mask…how much of the facial gymnastics was done in camera and how much is CGI!

Sometimes the humour runs to a high tech version of slapstick. For instance, a mini security drone is swallowed by Françoise’s dog. The dog runs into the house and promptly throws up his lunch and the drone. The drone reboots, takes off and flies around the house, instantly becoming a dog vomit aerosol dispenser. Heavy handed? A bit. Funny? I definitely did one of those “Eugh, yuck” laughs. To be fair, though, a lot of the humour is way more subtle.

I think I have made it clear that I’m a fan of Jean-Pierre Jeunet so there’s no surprise that I enjoyed Bigbug. I found it clever, funny, and lovely to look at. The only thing I’d complain about is that Dominique Pinon has a woefully small cameo and, while she appears in the credits, I missed Julie Ferrier altogether! Still, great fun and made this month’s Netflix bill worth every penny.

chevron_left Is there anything extra during the end credits of Cyrano?
Movie Review – Studio 666 chevron_right