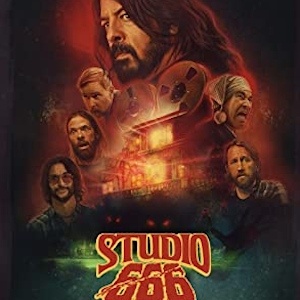 To be fair, I’m not the target audience, by a long shot. I don’t like horror movies and before the movie I couldn’t name a single song by the Foo Fighters. Come to think of it, I still can’t.


Just because I gave the movie a D/WTF doesn’t mean some people won’t love it. I thought the band members did a decent job acting. Well, they were playing themselves, so I’m not sure you call that acting, but whatever.

If you’re a fan of the band or horror movies you’ll probably enjoy this movie a whole lot more than I did.

About The Peetimes: I’ll be honest with you, I know zero about the Foo Fighters, so I hope I didn’t include some amazing, but subtle, scene in the Peetimes that fans will miss.

There are no extra scenes during, or after, the end credits of Studio 666. (What we mean by Anything Extra.)

Plot
Legendary rock band Foo Fighters move into an Encino mansion steeped in grisly rock and roll history to record their much anticipated 10th album. Once in the house, Dave Grohl finds himself grappling with supernatural forces that threaten both the completion of the album and the lives of the band.

chevron_left Movie Review – Bigbug (2022)
Is there anything extra during the end credits of Studio 666? chevron_right