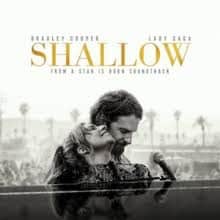 Not a shallow song.

One of the top movie hits from 2018 is A Star is Born, starring Lady Gaga and Bradley Cooper, and their best film song is Shallow, a duet that slays everyone who hears it. It’s almost a perfect song, and it won the awards to prove it:

It was also announced by the Oscars Academy (via Twitter) that Lady Gaga & Bradley Cooper will perform Shallow at the 2019 Oscars. All the news sources say Copper will perform in a tuxedo as himself, and not as his character Jackson Maine. IndieWire says “Cooper doesn’t intend to bring back Jackson’s deep voice either as he said he has fully retired the character.” No matter. Lady Gaga will probably do her big extravagantly costumed persona as herself. Expect the song to bring down the house!

Here’s the duet of Shallow, followed by the lyrics for you to learn, and sing along to in the privacy of your shower:

Tell me somethin’, girl
Are you happy in this modern world?
Or do you need more?
Is there somethin’ else you’re searchin’ for?

Tell me something, boy
Aren’t you tired tryin’ to fill that void?
Or do you need more?
Ain’t it hard keeping it so hardcore?

I’m falling
In all the good times I find myself
Longing for change
And in the bad times I fear myself
I’m off the deep end, watch as I dive in
I’ll never meet the ground
Crash through the surface, where they can’t hurt us
We’re far from the shallow now

I’m off the deep end, watch as I dive in
I’ll never meet the ground
Crash through the surface, where they can’t hurt us
We’re far from the shallow now

Movie Review – A Star Is Born

Quiz – The Movie and Musical World of Lady Gaga