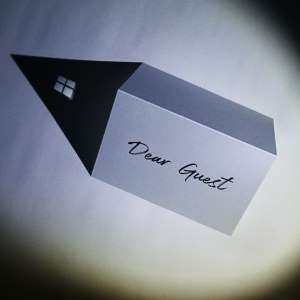 Dear Guest is a thriller for our times. At least I think it is… I’m a bit old and befuddled by a lot of these modern ways of doing things, but it seems to be aimed at putting the wind up the Airbnb users out there.

We start Dear Guest as Maria (Ashley Bell) and Jules (Noureen DeWulf) pull up outside a rather splendid house. As they approach the front door, they’re talking about the booking and that they don’t know who the owner is, due to them only having a reference number. Is this normal? Somebody who’s done this sort of thing before might know if this is something that can happen or is just totally bizarre.

They get into the house and have a look around and it is all rather plush and delightful. So far, so good. Jules goes to unpack, while Maria opens a bottle of wine. Then things start to go wrong. Maria finds that they’re locked in and Jules has disappeared. While looking for her, Jules finds a folded white card with “Dear Guest” written on it.


That covers pretty much what you see in the trailer and, by this point, we’re half way through the film; at a shade over eleven minutes this is a very short short. Not everything though… need to leave a couple of surprises for you!  And, despite the fact there’s only about four minutes left after disregarding the end credits, there is still a lot of story to go.

This was a nicely shot and acted short story in the same vein as Roald Dahl’s Tales Of The Unexpected. Both of the cast acquitted themselves well, with most of the onscreen time going to Ashley Bell.

On the strength of this, I had a look at some of producer/director/writer Megan Freels Johnston’s other works, and this seemed to be of a higher quality, which said to me that she’s developing as a filmmaker and storyteller.

Then again, as she’s Elmore Leonard’s granddaughter then she might have a genetic advantage!

I have to be fair and say that the story only just starts getting going in the ten minutes of actual screen time. Not in an abrupt, “Oops, we’ve run out of film/time/ideas/talent/money” kind of way, but in a delicious, “This is squaring up to be a cracking little thriller” way.

Admittedly, you’re left on a cliff hanger, but all that does is make you want to see the whole thing developed into a feature length treatment. I’d like to think of this as an extended trailer for something to come later.

If you get the chance, have a look at Dear Guest. It only lasts as long as boiling a kettle and making a cup of tea, so what have you got to lose? I just hope somebody throws some money at Megan Freels Johnston so she can extend this to a full length feature.