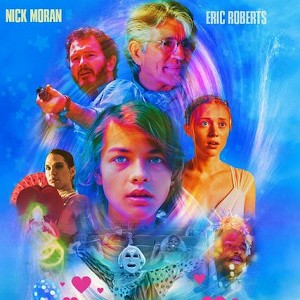 What to make of Greatland…


It might just be a stream of consciousness exercise undertaken by someone overdosing on psychotropic drugs.

What is Greatland about?

We start off in Greatland, which is a brightly coloured accommodation block, looking like a motel covered in neon coloured ribbons and paper. The set reminded me of when I first left home and went to college. I had big plans of how I was going to decorate my room which lasted right up until I saw how much posters actually cost, and I ended up sticking up pictures cut out of magazines. Greatland is inhabited by the Greats, who are gender fluid and diverse, but all male. As a result they end up marrying trees and having rabbits for children.

What happens is the hero, Ulysses (Arman Darbo), wakes up on his fifteenth birthday. His life controlling wrist band is linked to Mother (voiced by Jackie Loeb), who tells him what to do, where to go, maintains discipline, and monitors health… and you thought smart watches were intrusive! But it’s not just him: everyone has a bracelet, and  everyone includes his lifelong friend Ugly Duck (Chloe Ray Warmoth).

But then things start to get weird…

The onset of menstruation is known as getting the virus, which is when the girls have to take a sensitivity test which determines whether they become Proud Felinists or go to the S.L.A.V.E. Sanctuary; S.L.A.V.E. stands for Support, Love, Appreciation, Victory, Empowerment.

For the boys there is a “Dark Temple Ceremony,” which is when they are shown pornographic images until they produce a sample of “life force.”

Order is maintained by an ultra high camp police force known as Optimists. My first impression of the Optimists is they could have been dropped straight into a Ken Russell film; all stripper heels, sequined outfits, and a synthesized classical music soundtrack. The other group are the Ultras who live a life of luxury, and have the mature girls for their own use.

Yes, this all sounds like so much nonsense, but — trust me — this is what you get in Greatland! There is more to the story but, as always, spoilers would abound if I tried to tell you much more. What I will say is that it’s good to see established names like Eric Roberts (Alpha Altruist), Jackie Loeb (Lady Omega and voice of Mother), and Nick Moran (Clerk) supporting independent cinema with their talents. In fact, the best thing all around is the acting talent.

Maybe someone else might have got more from Greatland than I did. All I got was the occasional smile and a lot of bewilderment.

Finding PeeTimes – EXACTLY how I find those movie breaks

chevron_left Is there anything extra during the end credits of Freaky?
Indie Short Movie Review – Dear Guest chevron_right