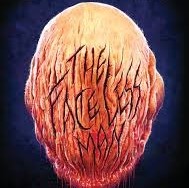 I try to find something I like in a film I’m reviewing, but this one was hard! To start with, The Faceless Man didn’t seem to know what it was… gangster, revenge, horror, family drama, small-town vigilante, gore fest… it seemed to wander through all of those genres at various points. I honestly think it could be edited in about half a dozen different ways to take out one or more of the story threads and it’d still be just as watchable, but half an hour shorter.

I was trying to think what The Faceless Man reminded me of, and it dawned on me that I was thinking of something like Bad Taste without the comedy, but with better image definition. The acting was poor and the effects were laughable, but Peter Jackson did all right for himself in the end. At least Mr Jackson’s beginnings were over thirty years ago and special effects have come a long way since then, or so I thought; considering how much explicit violence there was I would have thought that they’d have invested a bit more in those areas.


I think it is summed up at the very end, after the credits, when Sophie Thurling breaks the fourth wall and says, straight into the camera, “Is this a joke?”

Incidentally, I started off by saying I try to find something I like, and for me that is the aforementioned Ms Thurling who is in her first feature-length outing. She was, in the main, believable as the cancer sufferer estranged from her father, the coke-addled party girl, the aloof big city snob in a small town, the paranoid victim, and the bewildered survivor… see what I mean about it being over-genred!

For me, The Faceless Man is a D.