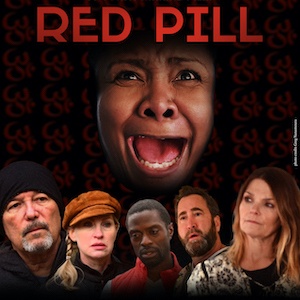 As is usual when there’s anything to do with American politics I always tend to get confused. The colours are the wrong way around, you can only take part if you’re a multi-millionaire, and there’s no one further to the left than the centre right. So when the IMDb summary reads… “The eve of the 2020 election, a posse of progressives ride into red country armed with heart, humor (sic), and naiveté. They should have brought heavy artillery.” one assumes it’ll be a political story which turns violent due to ideological differences.

Then, there is the title… Red Pill. This caused a minor frisson of interest around RunPee Towers concerning the Wachowski’s masterpiece The Matrix and the effects it has had on society at large.


The red pill vs the blue pill

The red pill/blue pill argument is well known but, for the benefit of those living in a cave since 1998, red pill = see the truth/blue pill = carry on in blissful ignorance.

The assumption is that Red Pill will make some allusion to that concept. I mean, the only alternative is a shameless attempt at cashing in on the release of Matrix: Resurrections later in the month…

So, I sit down expecting one thing and, blow me, it’s something totally different. What we get is a particularly brutal scene of a forced, branding and cæsarian section carried out without anæsthesia being watched by a distressed man with his head in a noose. Incidentally, the people doing the suffering are both black and they are surrounded by white women. We then cut to the title card which says Red Pill with the Om symbol (ॐ) underneath it, but rotated 90˚ clockwise, followed by opening credits. We then go on to meet our protagonists, a motley crew of different colours, religions, and backgrounds.

Astoundingly, they are a variety of people who managed to be irritating in a variety of different ways. They are, it seems, heading to pick up a surrogate child and have booked a stay in, what I think is called, an Airbnb. As they drive into town they pass houses with similarly dressed women standing to attention in the front garden; they all wear black shirts with the Om symbol in red on them but this time it’s rotated and flipped left to right. On arrival in the house, they start unpacking. They don’t worry about the strange neighbours, creepy decor, green laser, or obvious camera lenses in the bird pictures.

Sensible people would ruin the film by driving on to another, less unsettling town with a greater chance of survivability.  Instead, they decide to moan about the feng shui, set up their crystals, sing some protest songs, and stay. All because one of them, who wasn’t driving, says that she’s tired and hungry. I’m sorry but I would have told them to get in the back and have a nap while I drive very quickly to somewhere boring, normal, and less hazardous to health.

But, as I said earlier, that would make for a very short film.

What we end up with is a fairly standard, weird group of people attacking a group of outsiders film. All the political stuff is irrelevant, as is the use of Red Pill as a title; they do address it about halfway through but they seem to have made up their own definition.

All in all, it’s a serviceable “don’t go there” film which has tried to put a twist into the theme. I must admit I do wonder if there is an American version of our national tourist board. The poor person in charge must end up crying themselves to sleep every time one of these films gets released…