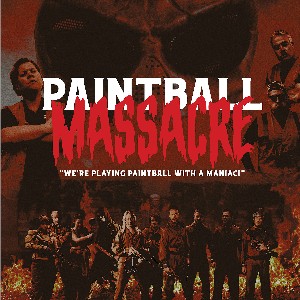 Paintball Massacre begins with Lee Latchford-Evans standing on a bridge overlooking a railway line while we hear a train approaching. He’s obviously contemplating suicide (he’s a fire officer who’s “seen too much”) until a text arrives inviting him to a school reunion and he changes his mind. Many parents of young girls over the last twenty years would happily throw him in front of the train as punishment for what Steps did over the years. So if Lee was hoping to redeem himself for 5,6,7,8, or Tragedy then Paintball Massacre probably isn’t going to do the job.

Paintball Massacre is described as a ‘comedy horror’ but, if I’m honest, doesn’t really hit the mark on either count. The comedy element is woefully inadequate and, while there’s a fair amount of blood and gore, it’s more of a would be thriller than a would be horror. The story concerns a group of school mates who meet up for a reunion. They have a few drinks in a bar in the evening and, next day, they go off to a paintball… place. I’m not sure what they call wherever it is that you run around shooting each other with paintballs but while they’re there the titular massacre takes place.


Part of the problem I had with Paintball Massacre was the characters. I’m trying to think if there were any of them that I even remotely liked and ended up thinking that the killer probably had a point and was wondering if he needed a hand. They were, without exception, quite horrible people; arrogant, self centred, and egoistic from start to sticky end. Even the character of Jess (Cheryl Burniston) who, I think, we were meant to have the most empathy with was, well, vapid and wishy-washy. There is the ophthalmologist, Aiden (Joe Hallett) who insists that he’s a real doctor but also talks like he’s street. Lauren (Natasha Killip) is a model who is self centred even for a model; I feel that other models would say “who does she think she is!” Sara (Aoife Smyth) makes bespoke furniture and other items and only had friends at school because she sold weed. Dan (Brendan Carr) is a squaddie who, for reasons not explained, always manages to get back from patrols even when his colleagues don’t. Matt (Ryan WInsley) claims to be a police officer but failed the aptitude tests and is actually a prison officer. Tommy (Lockhart Ogilvie) is a lifeguard on a Cornish beach. The one who’s the least unlikeable is Ben (Nathan Clough) but he’s an estate agent so he’s got no chance.

Other than the ‘friends’ there’s a few other characters that get to play a part. There’s the barman, Name (Name) put his part is little more than a cameo. As are the roles of the paintballing place Marshalls Shelley (Katy Brand), Eddie (Robert Portal), and Gary (Paul Holbrook). Katy Brand was the other name I recognised but that was from her stand up and panel show appearances. It’s the first time I’ve seen her act and I wasn’t entirely disappointed.

I suppose the main thrust of Paintball Massacre is a group of friends being killed in peculiarly specific ways which the spectre of spoilers prevents me from saying much more about. One thing I will say is that I’ve seen this film described as a slasher and a horror film but, really, it’s neither. It’s more like a whodunnit… who’s doing it is probably slightly more accurate. The problem I had with it is that there are more loose ends than a bowl of spaghetti. Things are mentioned and set up but, ultimately, not resolved including, unless I managed to miss something screamingly obvious, who actually dunnit.

For instance, they are pitched against another team but they don’t serve much purpose, don’t have any lines, and don’t get credited at the end. They could have split the friends into two groups and saved eight salaries. If you look through the résumés the cast there are some mild surprises: there are people who have been in Black Hawk Down, Alien vs Predator, and Hellraiser! Yes, there is an actual Cenobite in there! There’s also an upcoming performance of Lady Macbeth. That’s in a version of Macbeth by the way, not as some random walk on part in a totally different story. That’s in post-production at the moment and I don’t know when it’ll be available. So there’s talent here but it just doesn’t seem to have found the best vehicle.

Oh… don’t get me started on the effects!