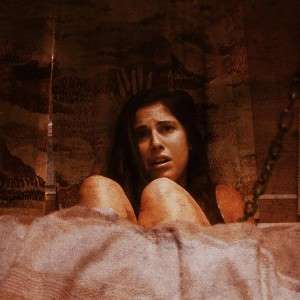 So here we are, back in a land down under, where women glow and men plunder…

It’s another Ozploitation film. I’ll admit that I’ve had No Such Thing As Monsters available for a few weeks, but have kept putting it off mainly due to the last Australian horror/thriller film I saw:  The Faceless Man which was, quite frankly, woeful.

As it goes, I shouldn’t have waited because, while No Such Thing As Monsters isn’t the cream of the crop, it isn’t too bad at all.


In short, it is another trip down a well worn track. That track being a young couple/family go deliberately/accidentally somewhere very remote and quiet for a peaceful break/unexpected break down and bump into a group of weird locals who wish them harm — the last bit tends to be fairly constant. It’s been trodden for The Hills Have Eyes, Wrong Turn, Eden Lake, Wolf Creek, and many, many more.

Does No Such Thing As Monsters bring anything new to the party?

I’ll say yes if only because I haven’t seen every film in this particular sub-genre, and it did have a few things which I thought were unusual. Now you’ll have to excuse me while I refer to the trailer to make sure I don’t give anything away…

And we’re back… the trailer shows we’re getting exactly what we’d expect from the dodgy family in the woods type film. A young couple Mary (Angel Giuffria) and David (Matthew Clarke) set off for a break, caravanning in the bush (we are in Australia after all), and all is peaceful and quiet until traveling in a fried-out kombi comes the dodgy family.

And dodgy indeed they are.

A brother (Jacob Fyfe as Elmer) who leaps about like a gibbon on amphetamine, one sister dressed up like a doll wearing a full face mask (Georgia Crisfield Smith as Amy), and two relatively normal sisters (Michaela Pascoe and Rebecca Fortuna as Nelly and Becca). Very soon things start to go wrong. Becca starts hitting on David and the next thing you know there’s screaming, chains, blood, etc.

For instance, the Australian bush covers 134 million hectares, so when a tiny minibus spits out a group of nut jobs about twenty metres away why don’t you just say, “Hi there, don’t worry about us, we’re moving on today,” and just drive away? I mean, David actually says, “We’re out in the bush — people are weird out here.” There are others, but, you know, spoilers.

Another wee niggle is that there are unnecessary and unexplained characters.

The film opens to an old man (David Macrae) being fed boiled eggs and soldiers at gunpoint and then screaming. He appears again towards the end, and does a bit more screaming but not much else. Over an hour into the film another character appears, an older woman billed as Mother (Rohana Hayes), but she doesn’t do much or add to the story. Throw in the fact that IMDb lists a character called The Hiker — played by Rochelle Pranadi — who doesn’t appear in the film or in the credits, and you do wonder how much ended up on the cutting room floor.

So what’s good about Monsters?

It is a consistent and reasonably well paced story. Yes, it’s been done before, but there is that theory that there are only seven basic plot structures in all of storytelling.

The acting is good in the main; I was particularly taken by Angel Giuffria, who had to do most of the heavy lifting within this film. I feel it’s appropriate to say, almost incidentally, that she is a lower left arm amputee. Appropriate because, while it’s not hidden, it’s not made a big deal of; Mary has another problem which, as it isn’t mentioned in the trailer I won’t mention here, has a much bigger effect on the narrative than her missing arm.

Another plus is the way the situation develops and how gender roles are reversed. It would be a very different story indeed if a group of three men and a woman turned up and started terrorising a couple. Also it means that Ms. Giuffria has more to do with her character; if a man is threatened with harm to his partner, his usual reaction is rage. Mary has a greater range of emotions when confronted with David being abused.

All in all, not the worst way to pass an hour and a half.