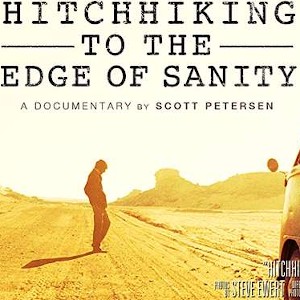 Hitchhiking to the Edge of Sanity is a testament to the insanity of youth. Like the midlife crisis that a lot of people go through there is also a quarter life crisis which kicks in around the late teens/early twenties. For a lot of us that coincides with disappearing off to college, ideally on the other side of the country, so that you can “find yourself” and then settle down into adulthood.

It’s the late sixties and there is a certain amount of unrest in the USA; we’re in the heights of the Cold War; Vietnam is still raging; the Civil Rights movement is gaining strength. Hitchhiking to the Edge of Sanity is the story of two friends, photographer Steve Ewart and writer Dick Russell, who decide to go on an adventure after graduating from college.

An historical adventure story in an era of upheaval

That makes it sound like they’re going on a Blytonesque romp equipped with crisps, treacle sandwiches, and lashings of ginger beer. They were starting out in their respective fields of journalism and had had some work published. So then they decided they needed to find their purpose in life and role in the “revolution,” and headed off to Europe. They land in late 1970 in time to cover the funeral of Charles de Gaulle. For reasons best ascribed to the invincibility of youth, they decide that if they can “do the never previously done” and hitchhike across the Sahara Desert, then they may be able to produce articles that they could sell to a bigger magazine such as National Geographic. Also it’s winter so that’s the best time to cross a desert, yes?


And so Hitchhiking to the Edge of Sanity is an opportunity for Steve and Dick to meet up again nearly fifty years after the event. They get to talk about their adventures, the people they met, and their ups and downs — both physical and mental. Obviously I can’t say too much about their escapades, other than they were the sort of thing that your parents worry will happen if you ever mention your plans to them. I was very close to signing up for the Légion étrangère following graduation, before sanity reasserted itself and I took a job teaching in an Inner London secondary school. The choice was a life of action, adventure, threat, injury, and conflict, or signing up for the French Foreign Legion…

It’s an interesting story that is well told and illustrated with archive photographs (some animated in a pleasantly amateurish way), and talking heads of the two protagonists. There are nice touches like photographer Steve still having the Nikon F SLR camera, and Dick turning up carrying his Smith Corona portable typewriter.

Anybody who’s spent a longer period of time in the company of someone knows you will end up either establishing a lifelong bond or developing a deep and enduring loathing, neither which you could have predicted at the outset.

What young ones nowadays won’t realise was how different things like photography was back then. Taking photographs involved not only having a camera (that’s an iPhone which you can’t use for making calls, texting, playing games, watching TV, listening to music, etc.) but also film. Rolls and rolls and rolls of it. Black & white or colour, print or slide, fast or slow — there were so many choices.

And then what size? From memory, the available sizes were 12, 24, or 36 frames. The bigger size meant you could carry more with you, but if you needed to change film type part way through a reel what do you do? I was reminded when Steve was showing off his old camera and I saw the stick-on film memo holder where the viewing screen is on digital cameras. These were for you to put the film box tab in to remind you what film you have loaded!

And that’s without going on about not being able to see your photos until you’ve got back home and paid a fortune to the chemist to get them developed and printed.

I thoroughly enjoyed Hitchhiking to the Edge of Sanity, but that doesn’t mean it is without faults but they are only minor ones

One was down to Steve Ewert being an American and referring to Shannon (which we all know is in Ireland) as Shannon, Ireland. For the life of me I thought he was talking about Shannon Island until it dawned on me. The other thing was that whoever did the date inserts had obviously never used an old fashioned typewriter. As I remember, to save the number of keys, they usually missed off the number one (1).  Whoever made up the date inserts was trying to use an olde style typeface like this. However, they insisted on typing the numbers with an uppercase ‘I’ — instead of a one when the convention, down our way at least, was to use a lower case ’L’.  So they were putting up dates like “January I97I” when they should have been “January l97l”.

But I’m not happy if I can’t moan about something!