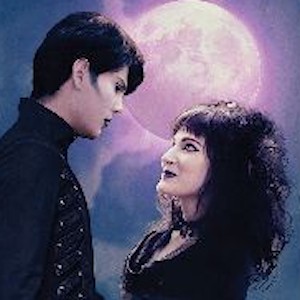 Teenager – check, female – check, goth – check. So that’s three for three against me being in the right demographic for My Summer As A Goth! But then, when has that ever mattered? If it did, Disney wouldn’t make money until seven year olds got credit cards.

My Summer As A Goth is a coming of age, self-discovery story. Teenager Joey (played excellently by Natalie Shershow) recently finished school and lost her father. Her mother is an author and has to spend the summer on a book tour, so drops Joey off with her grandparents. Living next door are the grandparent’s friends and their grandson Victor (Jack Levis). At least I assume Victor is the grandson… he seems too young for him to be their son. Actually, under all that makeup he could be in his fifties.

Been There, Done That


I’m sure everyone went through a phase as a teenager when they try to find their own style. Mine was long hair, budgie jacket, loon pants, and prog rock… no surprise I didn’t have a girlfriend until I went to college!

Almost everyone goes through that stage as a teenager ever since, roughly, some time after World War II. I watched a film called Hue And Cry, which was shot in 1947. The majority of the cast were what we’d now call teenagers, but you couldn’t tell just by looking. Back then kids were kids, and adults were adults; you just went from one to the other at the appropriate age. Up to about thirteen or fourteen years old you wore shorts, and then you graduated to long pants.

But with the 1950’s came things like Rock ’n’ Roll, James Dean and Marlon Brando, and dedicated fashion trends all aimed at the new youth movement — and it is still going strong. Nowadays, the entertainment market is swamped with books, films, and TV programmes aimed at the young adult: a term which includes teens and children from around seven or eight.

I enjoy a lot of young adult fiction perhaps, in part, because when I was the age for it it didn’t really exist. There was Enid Blyton, P L Travers, my favourite, Anthony Buckeridge, and not a lot else.

From Bobby Soxers To Today, Via Punks And Goths

My Summer As A Goth is, obviously, about a teenage goth fascination. Joey arrives at her delightfully bonkers grandparents’ ( Fayra Teeters and Jonas Israel) as a ‘normal’ teenager, and meets Victor the Goth.

What follows is a teenage love story which I’m not going to spoil by telling you what happens. Suffice to say that what you have is a delightfully acted and shot story that anybody born after WWII will recognise at least a part of. You may not have been the same gender, same orientation, same background, or been a goth, but you will have experienced some of the ups and downs that Joey goes through.

As I said at the beginning, this shouldn’t have been a film for me but, surprise, surprise… I really enjoyed it.