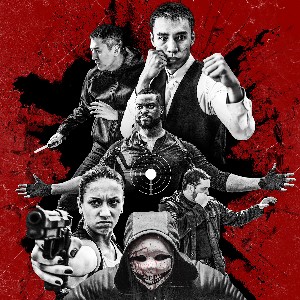 Contracts reminded me of the martial arts films that were everywhere in the ‘70s… the ones which had two ten minute fights in every quarter hour of film. And, to be honest, this isn’t a lot different. The story, such as it is, revolves around an elite group of assassins who are being killed off  by a, presumably, even eliter group, and their fight to find out who is doing what and to whom. Throw in a John Wickesque revenge theme (don’t worry, it’s the partner, not the dog that gets killed) …and that’s it really.

The driving force behind Contracts is Alex Chung.


However, On The Down Side…

The action is spot on. The fights are almost too well done, in that there are details and little  flourishes which tend to be missed the first time around and only really get noticed with repeat viewings.

Unfortunately, the script and acting make sitting through Contracts more than once a very unappetizing prospect. Perhaps Mr. Chung should have had the confidence to let someone else handle parts of the writing.

Characters are introduced as being fearless, indestructible killing machines, but are scared and put to death a few minutes later. A couple of characters meet up in a field… why? OK, you’re supposed to think that they don’t want to be overheard but, really? Considering the main characters are supposed to be ruthless, unfeeling killing machines, but then, when they have their victim facing away from them, insist on explaining their motivation and regrets instead of just doing their job.

Another aspect that needs work is the sound. Again… fights scenes great, everything else: meh. The music is intrusive, the dialogue sounds woolly, and there is a scene when someone is being “persuaded to talk” off screen and, I swear, the sound made me think of Yoda in some intestinal distress following a particularly vindictive curry.

Just as two characters randomly appear in a field, so we find ourselves on a beach for the climactic ‘Boss Fight’.  This is a ten minute, non stop, no holds barred battle to the death between the two protagonists, and the guy who turned out to be the baddie after all.

I will say that if unconventional fighting techniques (think Mile Tyson at his most notorious) is not your thing, then I don’t think you’ll enjoy the end piece.

In fact, the whole last twenty five minutes is given over to non stop action. Given that Contracts weighs in at around seventy five minutes, this is no bad thing, given the paucity of the acting talent.

Again, I’ll say the action scenes are first class. It’s obviously a low budget exercise, but not much was spared when it came to the fights, both in terms of performers and effects.

Movie Grade: Action scenes – A, Bits in between – D

chevron_left Indie Movie Review – My Summer As A Goth
Die Hard and Beyond: Are They Really Christmas Films? chevron_right