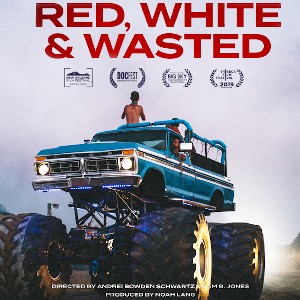 For the first ten minutes or so of Red, White & Wasted I was expecting to realise that this was a satire but — while that feeling never fully went away — I did realise that these were real people actually sharing their lives with us.

So Red, White & Wasted is the story of Matthew Burns and his family as they live their lives in Florida. Matthew, also known as Video Pat, makes his living collecting, processing, and selling scrap metal. From that he keeps himself, his two daughters, and his obsessions of driving big trucks through mud going, and filming himself and others doing it.

Now I have to say that I don’t know about the cost of living or the cost of trucks in the USA, but Video Pat seems able to afford to keep two expensive hobbies going. He says that he needs $12,000 p.a. to meet all his bills, and during the last year (I’m guessing 2016, because there’s talk of the Trump/Clinton election) he made $13,782, so he doesn’t have a vast amount of money to play with.

Red, White & Wasted opens to a mixed scene. Our hero is sitting in what, to many, is an idyllic spot surrounded by nature, stripping the plastic coating off wire. Then there’s a cut to a scene at night showing the whole family out dumpster diving behind Disney World. This is a family used to hard work and hard times. Now, before anyone thinks that I’m looking down my nose at them, I’d like to say that I’m not speaking from a position of privilege. I was brought up in a council tower block on an estate, so I do know what it means to be short of money.

There are some touching moments, like when Matthew/Pat is talking about the breakdown of his marriage. He has no allusions as to where the fault lies; it was him spending all his time and money splashing about in trucks, and filming others doing it. One scene has him looking at a tape of an event and it’s the soundtrack that hits home. You can hear his girls pleadingly saying, “C’mon Daddy, videotape me,” and he is saying, “Hang on, this is good,” as another truck drives through another puddle.

It’s Not Just a Stereotype If It’s True

Overall you wonder why they filled the film with so many stereotypes, but then you realise that the reason there are stereotypes is because there are people like that out there.