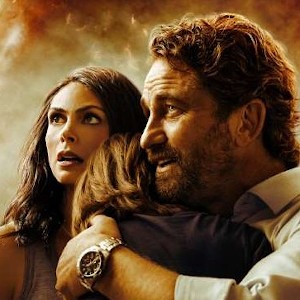 Disaster movies are my favorite genre. Don’t get me wrong, they’re not the best movies in the world by far. But damn good entertainment. Considering the genre as a whole, I think Greenland lands comfortably in the top third.

Dramatic, but not overly so

One commonality among many disaster movies is the melodramatic survival story. This is a common place where writers/directors often go overboard in disaster movies by trying to make every moment its own disaster.

For instance, in an overly dramatic movie like 2012, just taking off in a plane turns into a hugely dramatic event. I’ll be the first to admit that the scene in 2012 of the small plane taking off from the regional Los Angeles airport was really satisfying. But then they went on to include two more dramatic takeoffs and one dramatic aircraft landing. It got to be a bit much.

Contrast that with Greenland, where there was plenty of opportunity to add a dramatic takeoff scene — with the pilots struggling to gain altitude while clipping tree tops — but they passed on that, and all we see is the plane successfully taking off from a distant vantage point.

It feels like a tired trope that disaster movies feature husband and wife main characters who are separated when the movie begins.  Then throughout the movie the relationship is magically repaired as the disaster drama mounts.

Greenland opens by introducing the two main characters: John and Allison, a married couple who are separated. (Oh no, not this again.) It feels like the story is going to revolve around a man fighting to save his family and his marriage and all the overly dramatic scenes that entails, but fortunately the story doesn’t get bogged down with this plotline. In fact, I think it was brilliant to physically split the main characters up during part of their travels, to give each their own independent struggles. Otherwise the entire story would have been about the husband taking care of the wife time and time again, to earn back her love.

Kudos to writing Chris Sparling for pulling on all the right plot threads to increase the tension and drama, without pulling so hard the story comes unraveled. Chris Sparling also wrote the fantastic movie Sea of Trees, that is a real sleeper starring Matthew McConaughey, Naomi Watts, Ken Watanabe.

People are the real danger in a disaster movie

A nice touch this movie really gets right is the depiction of how people will react under survival circumstances. It isn’t all panic and every man for themselves. Of course there is plenty of that, but there are also many nuanced reactions by different groups of people that make this feel real.

One subtle thing I noticed was that the majority of good Samaritans are either black or immigrants. There are lots of military personal characters who have a one scene part with just a few lines. Nearly every military character taking a personal interest in the main characters is black. Then there’s a group of Mexicans who help one of the characters, and even when a group of people raid a drug store it’s a black man — part of the raiding group — who helps the main characters to safety.

Basically, nearly every minor character that is sympathetic isn’t a Caucasian. On the other hand, the two total shithead characters in this movie that illustrate the worst of humanity when it comes to matters of survival are both Caucasian. I can’t help but feel that the director wanted to make a very subtle statement. I just wonder how many people notice.

The physics of impacts

I’m not an expert, but I think they did a realistic job depicting the damage done by the impacts: everything from smallish impacts that only have a blast radius of a few meters, up to the massive impacts that destroy entire states. A nice touch was the scene of reentry debris. I haven’t seen that in a movie before, but that’s where it rains small debris in a concentrated area that was blown up into the atmosphere from a distant impact.

The main characters, Morena Baccarin (Firefly, Deadpool) and Gerard Butler (300, Olympus Has Fallen, London has Fallen), both did a fine job. Nothing award winning, because it’s not that kind of movie. But they both did the job needed to make their characters sympathetic and realistic. Specifically, I think Morena did a fantastic job in a variety of highly emotional scenes.

There are only two aspects I could nitpick. First is the time compression. It just feels like with everything the characters went through, it’s a real stretch that they could possibly make the trip in time. Perhaps I’m wrong and the writer/director had everything mapped and timed out, but it felt like there were jumps where characters made it farther than they should have been able to. So the transitions in time and space could have been clearer.

The last point to nitpick is fuel. They never stop for gas. That’s going to be a huge problem, because gas is going to be non-existent very quickly.

In a disaster movie such as this, if transition scenes and fuel are the only things I can find to nitpick about…then I’d say job well done.

Grade: B+
My grade is an overall assessment of the movie compared to all movies. But if I were grading it only in comparison to other disaster movies, I’d bump it up to an A.

chevron_left Is there anything extra during the end credits of Separation?
Indie Movie Review – Bad Witch chevron_right