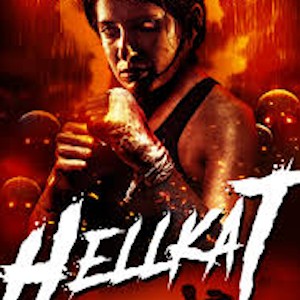 For instance, is it a British film or an American one? The film starts with recording of a fight commentary during which Katrina “The HellKat” Basynski (Sarah T Cohen) is knocked out. The commentators are most definitely British. I’d go as far as to say that one of them comes from within 10km of where I was born. We then see our protagonist sitting in what appears to be a cheap motel room smoking Hamilton cigarettes. They are American cigarettes though; Hamilton might be a made up name but at the current time the USA still allows logos, and type design on the packaging whereas over here they are all a manky greeny brown colour regardless of brand apart from the photos of cancerous tongues or smoke stained lungs.


What Fresh Hell Is This?

Then there are the cars. Kat drives a right hand drive VW but the driving scene is most definitely not in the UK… the road appears to stretch out in a straight line for what seems like the length of Wales. Also, she’s driving on the right. Well, until she breaks down and pulling off the road shows that there’s no rear number plate which is a total no-no over here. So she starts walking until she gets picked up by a man with an American accent (Jimmy Scott played by Ryan Davies), driving a left hand drive American car with a British number plate.

Despite the driver delivering a fair amount of religious rhetoric in a very American way it appears he is not of this Earth having more than just a smidgeon of demon DNA in his cells. Anyway, Kat gets away from him and runs away, through various unidentified parts of the UK, until she gets to some sort of transport station; bus, train, aeroplane, it isn’t specified. She looks at a departure board and it seems that something is leaving soon for “Pheonix, Albuquerque” (sic). She decides not to hop onto whatever leaves from there and walks out throwing a roll of $80 to a homeless guy. Seeing as how he is lying down in front of a sign for the DLR that won’t be much used to him until he can get to a Bureau De Change; the DLR is the Docklands Light Railway is an automated light metro system serving the redeveloped Docklands area of East London.

So is there a point to the seeming discrepancies? In short, yes… probably. It appears that the world we are in is a construct of Jimmy Scott’s tortured imagination. For instance, there are two moons. I don’t know if it is significant that the moons appear not to be spherical but they most definitely aren’t. The giveaway is the same as you sometimes see in children’s drawings of the sky at night. The moon is usually shown as being a crescent and we know that the other half is in shadow so you can’t see any of the stars that are behind it  but the mistake is to draw in a few stars. Well, the moons here have that same mistake… both of them!

But, ultimately, those are minor niggles which I think are put in just so that geeks and nerds like me can have something to put down on the “Goofs” page of IMDb. The main theme of the film is that, for reasons adequately explained in the film, Kat “HellKat” Bash finds herself in a purgatory type halfway house where she has to battle her way through a series of fights against a variety of monsters, demons, men, and beasts. So it’s full of hard hitting action sequences then? Sadly not. The fight scenes are, sadly, lack lustre and without even a hint of a thrill.  They are shot without an audience in a darkened area which totally manages to fail to generate any level of excitement and the soundtrack is equally uninspired so it doesn’t do the usual job of building a bit of tension.

A pity… an interesting concept but poorly executed.