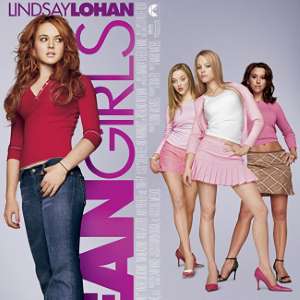 Such a cute classic teen comedy. Mean Girls isn’t striving to be a generational anthem like The Breakfast Club (an A+ movie), or even attempting to do so for young adults  — like St. Elmo’s Fire (rolling through with a B+). Still, within the limitations of being:

…Mean Girls has all the ingredients to be a highly rewatchable classic.

Mean Girls is well acted and the cast seems to have a blast. The leads have an easy chemistry. We get to see a then-unknown Amanda Seyfried in a supporting, cutely sympathetic role as a ‘mean girl’.  It’s got one of the best uses of Tina Fey this side of Sarah Palin, and Lindsay Lohan puts in wonderfully engaging work. It doesn’t matter that Lohan fell apart in her real life. That’s actually not our business.

“She doesn’t even go here!”

Mean Girls has the best quotes of a movie in this genre. There’s at least a dozen great usable lines for daily life, and some adorable set-pieces, like the Jingle Bell Rock scene.

The characters endure remarkably relatable crises for a 2004 film. It’s not dated. The pain of isolation resonates.

The lunch room clique drawing is just a hoot. I don’t know how the teen circles revolve now (in my day, it was Breakfast Club-slanted), but the humor is so on-target it still hurts. I’m just thankful I had good friends and never had to eat in a bathroom stall. Did you?

“Almost too gay to function.”

A lot of the gay/lesbian text here is notable for being unacceptable today, but it does illustrate kids being casually cruel to ‘outsiders’. Ultimately, Mean Girls makes it clear we’re all outsiders. Outsiders if you’re on a different jock team. If you want to join the Mathletes. If you’re a dwarf, in a wheelchair, overweight, a person of color, a ‘slut’, dumb, or yes, gay. Nobody’s safe.

Not even the ‘hot’ girls.

Even the seemingly most popular, self-assured kids hate what they see in the mirror. Tina Fey, the math coach, portrays a woman who understands this, has been through it herself — even though she’s seen as ‘too old’ to possibly understand. The teacher interactions and reactions are pure comedy gold, something I only notice now, as an adult. I love the adorably exasperated principal. What grownup hasn’t wanted to tell off the younger folks for their silly preoccupations?

There’s a lot to glean from Mean Girls, and the message is still relevant. Don’t just put it on for your teens and leave the room. Enjoy it with them, and be there to discuss it together afterwards.

This light flick isn’t high drama like The Shawshank Rebellion or Forrest Gump, or an epic tale like Avengers: Endgame or Lord of the Rings. Mean Girls is a fine, well-made, seamless small comedy that hits all the right notes.

Inconsequential teen comedies at the top of their game can be A+ movies on their own. We’re awarding that here.

About The Peetimes: Here are 2 good Peetimes that don’t cover any of the best humor or emotion.

I suggest the 1st Peetime, since nothing happens that you haven’t seen in a ton of teen party scenes, including the better Halloween party scene from earlier in the same movie.

There are no extra scenes during, or after, the end credits of Mean Girls. (What we mean by Anything Extra)

chevron_left Best of British Biographies – Patrick Stewart
Is there anything extra during the end credits of Back to the Future? chevron_right