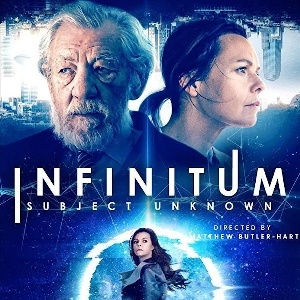 Sometimes you find things because you go looking for them, other times you find things because you go looking for something else! What I was doing was a bio piece on the wonderful Ian McKellen and I noticed that, on his IMDb list, there was a finished film which was new to me so I thought I’d have a look for it but couldn’t find it anywhere. Then, mere weeks later, what should pop up in the iTunes new releases… Infinitum: Subject Unknown which is, as you’ve probably guessed, the latest completed film of one of the greatest living British actors that I’d been looking for… “Oh frabjous day! Callooh! Callay!” I chortled in my joy.  What we have here is a real mongrel of a film… low budget techniques but crossed with high budget sensibilities.


What am I blithering about, you may ask. Well, to start with the low budget side of things Infinitum: Subject Unknown is a family made film. By that I mean Tori Butler-Hart, Matthew Butler-Hart, Wendy Muir Hart, Chris Hart, and Graham Butler are, between them, responsible for starring, producing, directing, writing, sound, cinematography, and even flying the drone! Throw in that the whole thing was shot on iPhones and you see where the low budget thing comes from. As we know though, low budget doesn’t have to mean low quality, low entertainment, or low, well, anything really. What you don’t expect to get is a face you recognise let alone an international mega star! But what’s this? In Infinitum: Subject Unknown we are spoiled by two very well known faces… Ian McKellen and Conleth Hill!  Yes! It’s only bloody Gandalf and Lord Varys! They may be little more than cameos but they are, as you’d expect, fully committed to their roles. As is Tori Butler-Hart who is a joy to watch. Not just because she has a look of Michelle Pfeiffer about her but because she absolutely nails every scene she’s in, which is, virtually, all of them!

Those Who Do Not Remember The Past…

So what is Infinitum: Subject Unknown about and does it qualify for inclusion in the GHD pantheon? We start with Dr Charles Marland-White (Ian McKellen) and Professor Aaron Östergaard (Conleth Hill), both of the Wytness Research Centre, talking about the “Paraverse” and how it had been explored by various special forces and intelligence networks around the world but that they were “on the cusp of propelling human evolution to a staggering new dimension.” Following the opening credits, we cut to a scene shot from one of those unexpected places you can find in London where you can see all the famous landmarks but still feel as though you are in the countryside.  Then it cuts to an ordinary street in a residential part of London. All seems normal apart from the airships passing by overhead…

We then fly up to the window of an attic room within which is Jane (Tori Butler-Hart). Unlike Phil Connors in Groundhog Day Jane does not wake up after a restful night’s sleep to the click of an alarm clock and Sonny and Cher warbling away. No. Jane is gagged and tied up on a chair and this is how she finds herself at the start of each cycle. Fortunately, as per the rules of GHD themed films, she does remember her situation and so pieces together how to get out of her bonds and, eventually, the room, house, and town she’s being held in. I think the fact that we’re talking about Infinitum: Subject Unknown being a GHD themed film means that I can say what I just said without entering into the domain of spoilerdom.  I’ll just say that, despite the repeating nature of these films, the end is a bit of a shock when it comes.

…Are Doomed To Repeat It

As I said earlier, Infinitum: Subject Unknown came to my attention because I was reading up on Sir Ian McKellen. When I finally got to see it I was confused. I’d read elsewhere that it was low budget/shot on iPhones/shot during lockdown/a family film but it didn’t look anything like what I’ve got used to over a year of independent film reviewing. On a whim I decided to email Fizz And Ginger Films who were behind everything and was answered by writer/director/producer Matthew Butler-Hart. Obviously, the first question is how on earth do you get Ian McKellen and Conleth Hill on board. He said “Conleth was in our last two films, The Isle and Two Down, and I’ve known Ian for about 20 years, when I first left drama school (I trained as an actor originally), and was then his assistant on some projects like The Da Vinci Code, and he’s supported our films in one way or another since we started. I chatted to him whilst we were filming last year and when he found out Conleth was involved he asked if there was a part for him….so we of course said yes!”

On the subject of lockdown filming, equipment used, and family involvement, Matthew said “Yes, it was very much a family affair! We shot it during the first lockdown in London, so we couldn’t have a crew on set or any other actors. So I directed it and shot it, and Tori did production design – that sort of thing. We had an editor and a VFX person watching the footage as we went. Tori’s parents were the scientists in the research place – we’d set up the camera at a safe distance and get them to wander around, and my brother Graham did some voice work for us. And yes, it was all shot on iPhones – I’d wanted to see how far I could push one, whilst trying to make it look like it wasn’t shot on a phone! Ian and Conleth’s segments were also shot on their iPhone’s, and I directed over FaceTime beforehand, which was an odd experience! The idea to film during the lockdown came from me reading a tweet by Edgar Wright saying he hoped some indie filmmakers were out there making use of the empty streets – so we used an element of a bigger film that we’ve written a while ago which involves the actual experiment (INFINITUM), and quickly wrote SUBJECT UNKNOWN as a sort of introduction into the world.”

Without a word of a lie, I’m going to be keeping an eye out for their past and future projects.

Indie Movie Review – The Pebble And The Boy

chevron_left Marvel Studios’ Hawkeye Official Trailer
The Tarantino Phenomenon or Why Are His Films So Successful? chevron_right