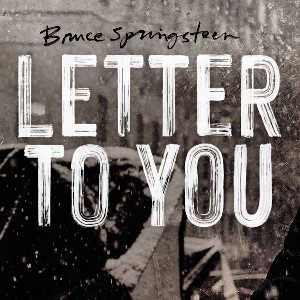 Any band that can comfortably fit in with musicians of that range of styles and time periods are, obviously, quite special. They’ve done side projects and solo projects, as musicians and as studio staff; some of them have even performed outside of the world of music. These are a seriously talented group of people. Let’s face it… they must be because people wouldn’t still be paying to see them coming, up to fifty years later if they weren’t.

Letter To You is a combination of a documentary charting the recording of a new album, a biopic of, mainly, Bruce Springsteen, and, obviously, a music film released in lieu of touring thanks to COVID-19.  The documentary element comes from director Tom Zimny, being allowed into Bruce’s rather plush and well equipped New Jersey home studio. It’s gorgeously shot in black and white, to reflect a typically grey New Jersey day.

To me, though, that adds to the beauty of the film. It was shot over the course of four days, while they recorded the new album, so we tend to see nothing of the writing process — but a lot of how the arrangements come together.

The biopic element comes in as, let’s face it, like the rest of us Bruce and the band are not getting any younger. Early on Bruce tells of seeing a friend of his shortly — before he died — and that meant he was the last remaining member of the first band he played with, and that gave rise to the track Last Man Standing.

There are a few stories along those lines along with comments, which say that they’ll be doing this until “the wheels fall off.”

Given that they’re all well, into their sixties if not actually in their seventies, you have to take your hat off to them.

Working On A Dream

And then there’s the music, obviously.

I remember going to gigs when the band had just released a new album. Occasionally, due to calendar conflicts, they would be trying to play a new album, which none of the audience had managed to hear. The result of this would be that the crowd would want to hear all the hits, and the band would be wanting to play the new stuff.

Whenever the front man started a sentence with, “This is one off the new album,” there would be a moderate stampede to the toilets, and I wondered how the music off the new Letter To You album would fare given that it was all new. Ultimately, it wasn’t a problem.

Because of the little introductions and background stories, you felt invested in the songs. It might have only been a little bit, but it was enough to make you want to hang around and listen. At least here you can pause things when you want to go to the toilet!

But, of course, the biggest reason for sticking with it from start to finish is fairly obvious… it’s only Bruce bloody Springsteen! If you are a fan you’ll enjoy it, and if you aren’t ,then you probably won’t have got as far as pressing play anyway.

If you’re on the fence, then there’s enough peripheral stuff going on around the music to make it interesting.

Am I a fan?  Sort of, I suppose. I had every one of his studio albums from Greetings From Asbury Park, N.J. to Born In The U.S.A. but nothing since that. I’ve never managed to get to see play live in person, but I have seen recordings of his live sets; due to Glastonbury being cancelled this year, the BBC showed a solid week of live music recordings, and his set in Hyde Park was awesome.

My guess is that’s why they call him The Boss!