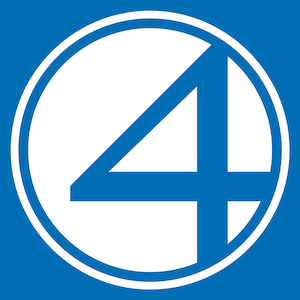 I’m sure I’ve said elsewhere that I preferred Marvel comics to DC back in the last millennium when I was a child. I remember walking for what seemed like miles to the only shop I knew that sold American comics. I can still smell the paper and ink of the new arrivals.

Incidentally, before anybody starts thinking that I’m being insulting using the Cockney rhyming slang of olde London Town, I must point out that you’re thinking of “pen and ink” which is the accepted coupling for “stink”.

I still remember my favourites; X-Men, Iron Man, Spider-Man, Thor, and the Fantastic Four. I also remember the Hulk, Captain America, and Doctor Strange but they didn’t appeal to me as much. I’m not sure why, they just didn’t resonate for me but they did mean that I had a few more to read before having to resort to Superman.

What helped was the cartoon series. Over here we got to see the Fantastic Four and Spider-Man. Iron Man never made it as far as I can remember but that could just be me. I’ll be honest in that I don’t remember much of the Fantastic Four; maybe it didn’t have a memorable theme song. Altogether now…”Spider-Man, Spider-Man, does whatever a spider can…”

Various animation series popped up over the years but, given we’re talking about the CGI available between the sixties and the nineties that is no surprise. Invisibility had been done since the thirties so Invisible Woman wasn’t a problem. The Thing is, basically, a costume and super strength effects; also, not a big deal.

Problems start with the Human Torch who is a living, breathing, flying man of flame which was a big ask in the days when even a high resolution character still looked like they were made out of Lego. They get even worse with Mr Fantastic who is, basically, a human rubber band. If he can’t be seen to slide through a 5mm gap under a door then he isn’t worth the ticket money.

Eventually though, a live action version went into production. After all, this was the same time that Steven Spielberg was making Jurassic Park so computer effects were starting to be taken seriously. The difference? Spielberg had a budget of $63 million to play with while Oley Sassone had a mere $1 million.

During the documentary it’s made clear that the grown ups in the studio wanted the 1994 version destroyed. There are bootleg or pirate copies of it around but, for those who don’t remember the nineties, the video duplicating technology wasn’t brilliant. A VHS recording from a VHS recording which was also several generations old had the tendency to look like a blizzard. In short, you can find a copy but it’s probably not worth making the effort to download it.

It was a few years before special effects had become cheap enough to make using them worth while. It was the year 2000 that saw the first Marvel based, ensemble piece featuring a group of characters with superpowers. This though was X-Men and it was, in my humble opinion, very good! The characters were relatable, the effects were believable, the story was enjoyable, and the whole thing was, indeed still is, eminently re-watchable.

So hopes were high for the Fantastic Four film when it finally landed in 2005. At the box office it did well. It brought in over $330 million against a budget of around $100 million. Somehow though it just lacked a certain spark. I don’t know why. The cast was good; Stan Lee is on record as saying that Michael Chiklis’s Thing is his favourite performance in any Marvel film.

Two years later the sequel, Fantastic Four: Rise Of The Silver Surfer was released and, again, failed to set the world on fire. It failed to ignite so much that there was not a third outing. Which again draws unfavourable comparison with the X-Men franchise which made it into double figures.

We Are Not Gods Just People

And that’s not to mention the other Marvel based ensemble franchise which centred around The Avengers. Incidentally, another vindication of the casting of the Fantastic Four is that a certain Mr Chris Evans went from being Johnny Storm/The Human Torch to becoming Steve Rogers/Captain America.  That’ll take a fair old bit of retconning if the Fantastic Four ever make it into Marvel canon.

To make things a bit easier on that front there was another bite at the F4 cherry in 2015. This time it was stylised as Fant4stic  but was also seen as Fantastic Four on occasions. This one made the previous outing look like a roaring success. It barely scraped into profit returning $167.9 million against a spend of $120 million. It was fairly universally panned and the planned sequel was dropped.

Bizarrely though, there was one bright spot in that the guy playing the Human Torch (Michael B Jordan) got another chance at Marvel fame by playing Killmonger/Eric Stevens in Black Panther.

Why did The Avengers and The X-Men do so spectacularly well while The Fantastic Four failed so miserably? I really don’t know! It defies all logic. I mean, Stan Lee was the creative force behind them all. They are all groups of flawed, naturalistic people; superheroes that have personal problems. They are all superheroes you could imagine yourself being but one lot failed on film while the others romped home. Anybody out there have any ideas why?

chevron_left Is there anything extra during the end credits of The Contractor?
Indie Movie Review – Project ‘Gemini’ chevron_right