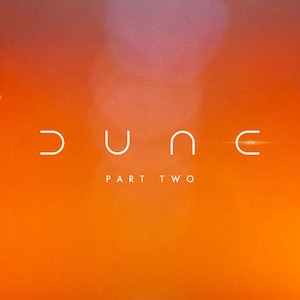 When Dune came out in 2021 it was to favourable reviews. It earned $401.8m against a spend of $165m despite being released during the tail end of the COVID-19 pandemic. Those two factors were enough to guarantee a sequel.

Fairly obviously, it is a direct sequel to Dune. This time out we’ll be following the clairvoyant Duke Paul Atreides as he seeks revenge and bids to take control of the empire.

Once again Denis Villeneuve is directing as well as co-writing the screenplay with Jon Spaihts and Eric Roth. Cinematography and Editing remain in the hands of Greig Fraser and Joe Walker respectively. Hans Zimmer has returned to do the music.

Currently the release date is set for 17th November 2023. I say ‘currently’ because you know the way these things have been going recently! It was originally scheduled to be released on 20th October 2023.

UPDATE: On October 11th, 2022 Warner Bros. announced that they are moving the release date UP! It’s only moved up by two weeks to November 3rd, 2023, but still. After a few years of movie release dates constantly sliding back it’s nice to see one slide forward. Does that mean the pandemic is over?

Characters, So Far, In Dune: Part 2

What we have is an, initially, three way dispute between Houses Atreides, Corrino, and Harkonnen.  As well as the ruling families there are all their advisors, aides, and auxiliary hangers on.  Throw into the mix the Fremen desert tribe, and the Bene Gesserit religious order and that is your dramatis personae.

You will, almost definitely, need to have seen Dune. As I said earlier, this is a direct sequel to the 2021 first outing and, ultimately, you can only get so much catching up done with exposition, flashbacks, and scenes titled “Previously on Dune”. My guess is that the studio is hoping the pandemic will be over by the release of Dune: Part 2 and people will be rushing back to the cinema for the latest blockbusters.

If next year’s audiences didn’t manage to get out to see Dune at the cinema, there have been digital downloads available as well as DVDs. Despite that, my guess is that there will be plenty of re-screening opportunities available in the run-up to the release date. I’m also betting there’ll be the opportunity for the real Dune aficionados to roll up at about 21:00 for a screening of the 2021 release to refresh things in time for a showing of Dune: Part 2 at one minute past midnight on, fingers crossed, 17th November 2023.

The future of any franchise is, ultimately, dependent on box office performance but Denis Villeneuve has expressed interest in making a third film based on Dune Messiah, the second novel in the series. That was confirmed by co-writer Jon Spaihts in March 2022. Whether that is for a third film or a television spin-off series will depend on ticket sales.

As any fan of the book series will know there is a lot of source material to work from. Despite Frank Herbert dying in 1986 the mantle of authorship has been passed on and novels continue to be written: The Sands Of Dune and The Heir Of Caladan are both due out in 2022. In short, if people keep paying to see sequels, then they could keep coming.

Yes, it’s about Dune – The Lyrics to Fatboy Slim’s Weapon of Choice