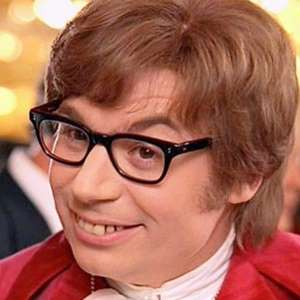 The first is the best film in the Austin Powers: International Man of Mystery James Bond spoof threquel. I’m pleased to see the simplest, most original tale stuck the landing best.

I’d have been happy to keep Vanessa as a “married” Bond girl in the next movies, but our hero has to be free to bed the women. (ALL the women.) You how it goes with those international men of mystery.


If you want to stay with a happily hitched Powers at the end, end the series here on this note of fluffy fun.

All the time travel plots are inconsequential, just serving as vehicles to get out fish-out-of-water gags in place. Each film takes Austin to a different groovy decade to play in. Whereby, it must be said: he doesn’t even fit in to his native 60s, unless the past really was a crockpot of every stereotypical technicolor and musical cacophony.

Riiiiight. Are the deaths gory?

Shagadelic. Is this okay for kids?

This is almost a proper morality tale beneath the poop jokes, sight gags, double roles, and outrageous set pieces –which are so far over the top that they reach out and nudge you from behind. All the discretionary violence is played for gags, but thankfully don’t commit tonal whiplash. Austin Powers is about the fun. And Mike Myers. And. All. The. Sex.

If you have to explain PG-13 sex (or even Mojo) to the kids, maybe skip this series. Or try to watch this first lightest installment with them and see how well the poop and pee bits go.

Even the PG-13  language is weaksauce, displacing our F words with the colorful Briticisms Americans generally get away with: Shag, Balls, Bloody, Wanker, and Bugger Off. This is part of the fun.

Groovy, baby. Is there a message?

Not really. The origin story is a time travel romp slash James Bond parody with more film nods than you can stay sober to in a drinking game (starting with Oh Behave and moving through Baby). There’s a drinking game devoted to Austin Powers here.

The main message, such as it is:

But know that monogamy as a thing is trashed in 2 and 3. (There are talks for a 4th film, BTW, after the pandemic. AP 4: Sex & the Pandemic?)

What sticks out on my rewatch: some of the jokes deemed thigh-slappers in the early 90s are uncomfortable now. More on that in the sequel, the review for “The Spy Who Shagged Me.” For now, the laughs are light, prodigious, and sometimes cheap.

Smashing! Should I binge them?

Well worth catching the three in a row to ferret out the “true meaning” in the Austin Powers series, which turns out to be the meaning of family — and not world domination, cool lairs, hapless henchmen, James Bond allusions…or even sex. But we have to work through a lot of fat, poop, and inappropriate puns to get there. Most of the best sketches take time to spread, like a meaty fart across the series, so it’s worth watching these sequentially.

Austin Powers actually works as a spy thriller parody better than some of the poorer Bond films, attracting enough good talent for the actors to leaven murder most foul with an air of spring break. It’s should tide you over a while until we get the new James Bond flick — fingers crossed — in November 2020.

But don’t watch the sequel with your kids until you’ve vetted it first. It’s got some problems.

About The Peetimes: Both easy peasy Peetimes in Austin Powers occur during music montages. Either one will do, and neither are especially funny.

There are extra scenes during, or after, the end credits of Austin Powers: International Man of Mystery. (What we mean by Anything Extra)

Movie Review – The Spy Who Dumped Me