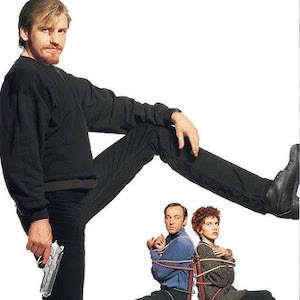 Ah yes, Christmas is, first and foremost, a time for family. Mind you, with a family like this one I can understand why people going off skiing somewhere distant or stock up on microwave roast meals and keep the curtains closed. Throw in the heightened fears of burglary surrounding houses full of brand new gear and a film that combines a dysfunctional family and a cat burglar and you have the makings of a cinematic nightmare.

Or so you might think. Instead we have a a comedy with just the right amount of cringe and plenty of laughs. But then The Ref is another recommendation from Terri. This time it is one of her favourites rather than her mother’s so let’s hope she has inherited the same good taste. I am seriously thinking about setting up a recommended reviews section. Either that or get Terri on the team! So please take note, if you have any favourites that we haven’t seen, drop us a line in the comments below.

I have to admit that, on first look, I didn’t know how much I’d get from The Ref. My first thought was that it was a sport film as in The Referee. I don’t know a lot about sports in my home country and as for US sports, well, I could write everything I know on a small postage stamp while using a very broad nibbed marker. Still, I had a quick read of the IMDb summary and realised that I was wide of the mark. I also realised that, when it was released over here it was called Hostile Hostages which is a much more accurate description. So what is The Ref about?

In short, we have a wealthy couple; Lloyd and Caroline Chasseur  – Kevin Spacey and Judy Davis. Their relationship is on the verge of falling apart for a variety of reasons and they are spending Christmas Eve in a marriage counselling session. While they are in therapy, a cat burglar (Gus – Denis Leary) is cracking a safe. It goes well until he is thwarted by some Home Alone-esque booby traps. While making his escape he kidnaps Lloyd and Caroline and goes back to their house to hide until the immediate police activity dies down.  Enter the rest of the bickering and bitching family along with a drunken neighbour. They have to take unusual  steps to get through the night.

Connecticut Is The Fifth Ring Of Hell

One thing that threw me was the billing order at the start; Kevin Spacey was listed third! It reminded me of when I rewatched Shallow Grave and Ewan McGregor was listed third. Now I know that Mr Spacey is having career difficulties of, allegedly, his own making but I just assumed he was top billed for everything he was in back in the nineties. Similarly I was surprised to find out that this was the film debut of JK Simmons. I know that he’s a similar age to me so I just assumed he had been acting since he was in his late teens or early twenties rather than his late thirties. Still, I think he is marvellous. I would watch him in anything; if he were British I’d be doing a bio of him!

Four years later Kevin Spacey went on to win an Oscar for playing a beleaguered, harassed husband with a wife called Carolyn and some odd neighbours.  Now I’m not insinuating that American Beauty copied The Ref but it was obviously a dry run for Kevin. I won’t say any more about what happens because I think you owe it to yourselves to track down a copy of The Ref/Hostile Hostages and give it a watch. It is, very probably, one of the best films you have never seen…probably never heard of!  And, once again, I have to thank Terri for the recommendation.