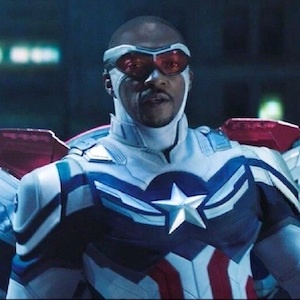 Ah, yes…Captain America. I don’t pretend to know all the mythology as laid down in the comic books due to never having read them! All I know is what I’ve seen on various screens large and small. Also, the plot is seriously under wraps; I’m guessing that means no part for Tom Holland then! So, bearing all that in mind, here we go!

Who Is Captain America?

A very good question! Originally he was Steve Rogers (Chris Evans) but Avengers: Endgame saw him toddle off back through time to find love, happiness, and an ordinary life. He passed the baton, well, shield on to Sam Wilson (Anthony Mackie) who could add in his Falconishness into the mix. However, probably due to a massive case of imposter syndrome, Sam decided to retire the shield into a memorial display.


The government don’t fancy this idea and recruit a new guy to put on the mask and carry the shield, Captain John Walker (Wyatt Russell). He plays the part of Captain America for a while but things start to go all pear shaped and he gets booted from the post. Sam trots off to Wakanda and returns with a new suit and embraces his role as Captain America.

Wildly unofficial but it’ll have to do until the official one gets released.

As I said, the plot is shrouded in secrecy so it’s hard to say what you will or will not need to know. I’ve heard that it might be dealing with Sam Wilson’s struggle to come to terms with being Captain America so it may be useful to see the last bit of Avengers: Endgame and The Falcon And The Winter Soldier.

I’ve said before that Marvel have their future phases pretty well nailed down. Having said that, Phase Six still looks quite thin. There’s no mention of another Captain America standalone but there are two Avengers titles in the line up. Be honest, you can’t have the Avengers without Captain America!

chevron_left Reacher: Season 2 – What You Need To Know
How Movies Help Us Relax and Get Inspired chevron_right