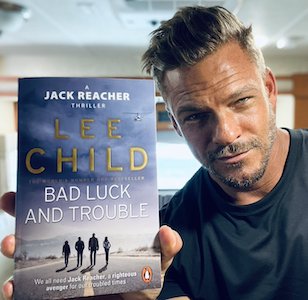 I said elsewhere how much I enjoyed the Jack Reacher series whether it was on the page, the cinema screen, or on the TV. So it should come as no surprise to anyone that I am chuffed to bits that the second season has actually started filming.

Jack Reacher was a major in the US Army’s military police branch. He set up an elite section called the 110th Special Investigations Unit before retiring due to various reasons. He had had a nomadic lifestyle from his birth and, with no family to tether him to one place, he spends his post army days living off his army pension and exploring the USA, Mainly because it is his “home” country but also because it is, paradoxically, the one he’d spent least time in.


He is a big man (6’5”/1.96m and 15-18st/95-115kg) with advanced training in various combat techniques. I’m slightly shorter and a wee bit heavier than Reacher is meant to be. However, he is a natural mesomorph whereas I tend towards the endomorph end of the spectrum. He has a six pack while I tend to have the whole barrel.

He spends his time wandering around without any real purpose beyond “this time I’ll go East to West” or “didn’t that obscure blues musician come from around here?” Obviously that would be a pretty dull series of books but what happens is he gets into all manner of scrapes and pickles, usually because he is helping people out.

This is another production for Amazon Prime Video so it may well be that the same crew are involved.

They only started shooting on 23rd September! I think we’ll be looking at Spring 2023 though.

See above! Here’s the first season trailer which I will replace once the new one is shot and released.

Characters, So Far, In Reacher 2

Reacher, Neagley, and other former members of the 110th. As I said before, Reacher spends his time wandering around and encountering different people so it’s highly unlikely that any characters from the first season will be popping up again. The first season followed the book quite closely so, if you’re desperate to know who’ll be popping up, I suggest you start with Bad Luck And Trouble.

What I wrote up in the “Who is Reacher” bit tells you all you need to know about the main character. The first season was based on the first novel, The Killing Floor, and this second season is based on Bad Luck And Trouble. That is the eleventh novel in the series and you may well be wondering how that can work. Panic not! The novel series is not written as an ongoing storyline and they can be read in any order. As a result, they can also be filmed in any order.

Long term, I’m just hoping they keep making them! The 27th novel is due out later this month, 25th October to be precise, and there are fifteen short stories to play with.