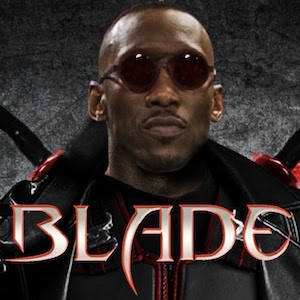 I remember the Wesley Snipes era Blade and quite enjoyed the trilogy. It ran from 1998 to 2004 and led to a spin-off TV series. Blade: The Series only ran for one season but that isn’t necessarily down to quality! It was being made by a fledgling network (Spike TV) and they couldn’t afford to make any more. It got caught up in the same morass of legal difficulties that enmeshed Fantastic Four and Spider-Man and so didn’t pop up in the early days of the MCU.

Interestingly enough, Blade did make a substantial amount of money for Marvel Comics. Enough to convince them that there was a market for superhero films. The profits were spent as seed money for what eventually became the MCU.

That all rather depends on which origin story they follow. The original comic book has him being Eric Cross-Brooks born in Soho, London in 1929. His mother started having labour problems and a doctor was called. Unfortunately this doctor was a vampire named Deacon Frost who drained Blade’s mother of all her blood. During her death some vampire enzymes were passed to Eric which gave him vampire powers but without their weaknesses.


In the 1998 film version, however,  Blade is Eric Brooks and he is a Dhampir. This is a creature from Balkan folklore and is a human/vampire hybrid. They usually arise from a male vampire doing the naughties with a human female. Most importantly though there is the same vampire strength without the weaknesses thing. Apart from blood…Blade needs human blood but takes a serum to offset that particular weakness.

3rd November 2023 but, as of the time of writing, filming hasn’t started yet sooo…

As I just said, filming hasn’t started yet so anything you find on YouTube is probably fan fiction.

So far the only person we actually know is in it is Mahershala Ali. I’m fairly confident of that thanks to his voice cameo in the Eternals post credit scene; “Sure you’re ready for that Mr Whitman?” Delroy Lindo and Aaron Pierre are also listed as appearing but no news on their roles yet.

Characters, So Far, In Blade

Well, Mahershala Ali is Blade. Other than that though…watch this space! I might hazard a guess at Delroy Lindo being the Whistler character and Aaron Pierre as the bid baddie.

This is an origin story so you don’t need to know much. Just remember the vampire hunting human with the powers of a vampire bit and you’ll be fine.

As with every film, it will depend on box office takings. There’s no Blade 2 listed yet but Phase Six is looking very thin at the moment…